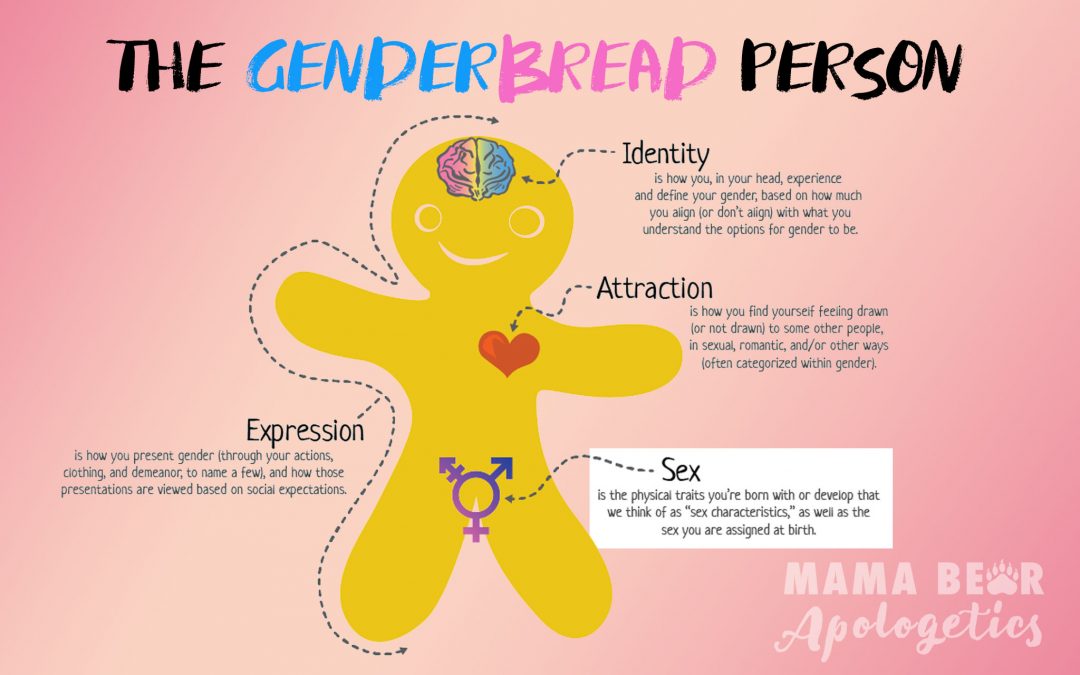 Nothing summarizes our discussion more today than the famous scene from Kindergarten Cop where a little boy respectfully raises his hand to speak and waits to be called upon. His words of wisdom for the class that he so ardently and patiently waited to share? “Boys have a penis. Girls have a vagina.”

In 1990, this was considered so obvious that that was part of the joke. Fast forward thirty years, and a statement like this could now be prosecuted as hate speech.  According to the genderbread person curriculum image, the simple definition of biological sex is :

“the physical traits you are born with or develop that we think of as “sex characteristics,” as well as the sex you are assigned at birth.”

Let’s break this statement down.

Within this definition, it is all a matter of perception. The physical traits are those that we think of as “sex characteristics”–not those that objectively correspond to biological sex. Notice this shift in language—it has taken a literal, physiological, scientifically testable statement and reduced it to a perception. If we were to give a drop of blood to a technician and ask them what “sex characteristics” the subject naturally possessed, they could probably get it right 99.999% of the time.[1] The genderbread person’s shift in language—from biological sex being absolute to being subjective—is something that we need to make our kids aware of. (To better understand the concept of objective vs subjective, see the Mama Bear Apologetics book chapter 8.)What exactly do they mean by 'the sex you were assigned at birth?' Was there someone flipping a coin? Click To Tweet

Along these same lines, the genderbread curriculum defines biological sex as the “sex that you are assigned at birth,” as if the doctor just flipped a coin and slapped a label on you as male or female. I don’t want to oversimplify this… but this really is a simple concept. For millennia, unless a baby was born with a genetic abnormality (which does happen) assigning a sex was as simple as looking at their nether regions. Unless there is some sort of abnormality, this method of assigning biological sex has, historically, been extremely reliable.

But before we accuse the curriculum of only looking at body parts, I do applaud it for being more comprehensive than the kid in Kindergarten Cop.

“Let’s consider biological sex in the ultra-reductive way society does: being female means having a vagina, ovaries, two X chromosomes, predominant estrogen, and the ability to grow a baby in your abdominal area; being male means having testes, a penis, an XY chromosome configuration, predominant testosterone, and the ability to put a baby in a female’s abdominal area; and being intersex can be any combination of what I just described. . . In reality, biological sex, like gender identity and expression, for most folks, is more nuanced than that.” (emphasis mine)

Is this really ultra reductive?

In some ways, yes. Being female doesn’t necessarily mean that you have these things—like ovaries. There are plenty of women who have either had hysterectomies or cancer which required the removal of the uterus and ovaries. They are no less female than a woman with ovaries and uterus. If I were to tweak this statement to be more accurate, I’d say that “a person possesses the genetic programming for these things, and unless abnormalities or tampering occur, will manifest these characteristics.” It pains me that we have to get this specific, but part of (successfully) engaging in the cultural battle means that we have to use words that cannot be refuted. We must take objective arguments and create objectively true statements. Otherwise, we will be arguing over nuances, technicalities, and perceptions.

So what about intersex individuals? Is that the same thing as transgender?

This is a common misconception. Intersex and transgender are not the same thing. Intersex is not based on a person’s perception. Intersex occurs when there is a genetic or physical abnormality in a person’s sexual characteristics. For example, in the 50’s and 60’s, there was a revolutionary new anti-nausea medicine called thalidomide that supposedly helped with morning sickness. Sounds great, right? Until the babies started being born with what used to be called hermaphrodism. Hermaphrodites simultaneously exhibit a modified version of male and female sex organs. They often have underdeveloped versions of both a penis and vagina with a chaotic blend of hormones. I often think about these individuals every time I mark “female” on a survey. I can’t imagine how truly confusing and frustrating that one little question must be for this group every time they fill out a form. This group has a real, legitimate difficulty in that they are truly intersex. And it should be noted that this particular group, the one group that has a legitimate reason to question their sex, is not the group that is championing for a redefinition of sex outside of the binary of male and female. According to the Intersex Society of North America’s FAQS page, “we are trying to make the world a safe place for intersex kids, and we don’t think labeling them with a [third] gender category that in essence doesn’t exist would help them.”[2] There is a world of difference between intersex and transgender. Click To Tweet

I don’t have quite enough research on all the details of intersex individuals to go more fully into this condition, but please know that this condition is real, confusing, and individuals who were born with it cannot be lumped into the same category as the rest of the LGBTQ+ camp. You can see a list of known sex chromosome abnormalities here.

So how do we prevent our kids from buying into the propaganda?

[1] There’s always the possibility of a genetic abnormality or bad technician.