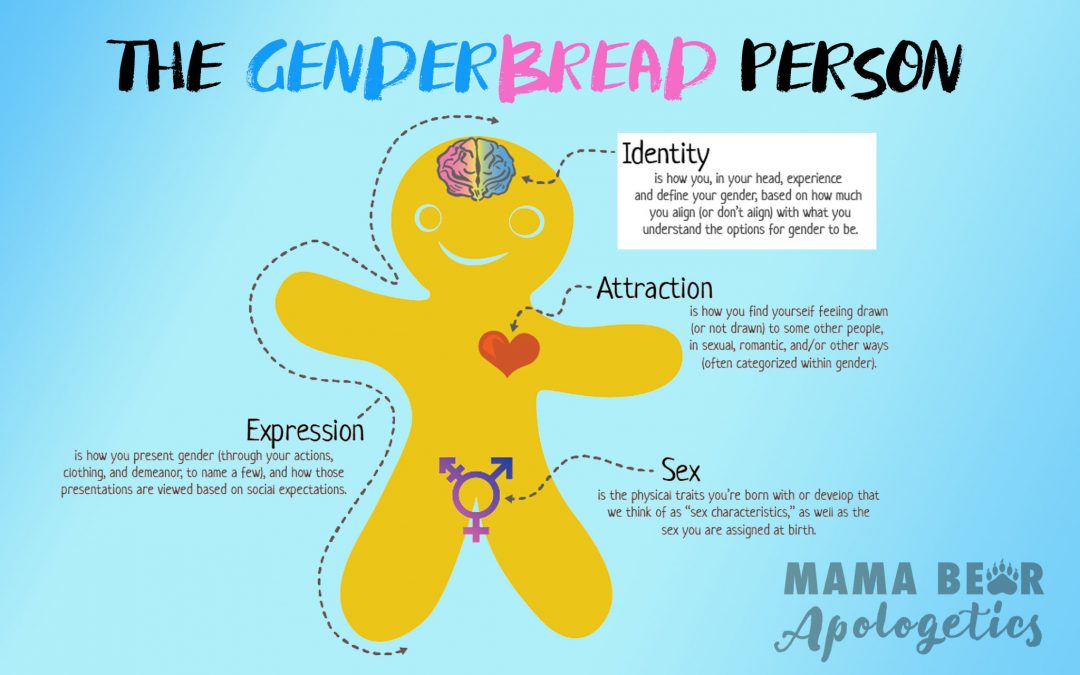 Forget the muffin man. Do you know the Genderbread Person? If not, you need to—and especially if you have kids. The Genderbread Person is now a commonly used craft for teaching kids (at least those young enough to be interested in anthropomorphic gingerbread cookies) how to identify the various LGBTQ identities. (The Gender Unicorn is another similar curriculum that is used, but more for older students. They are basically the same concepts.)

So today we begin a 4 part series discussing what aspects of sexuality and gender are being taught through this curriculum, and how parents can understand and discuss the implication of it. Before we start this series though, I want to point everyone back to one of the original posts we did on two questions we need to ask ourselves before we begin speaking on the topic of sexuality. But first, we must prepare our hearts to speak truth into a chaotic world that literally doesn’t know male from female anymore.  We must remember that we are not just combatting ideas. There are real people who are being held captive to these ideas. So as we Mama Bears always say: we have to demolish the ideas without demolishing the people.

In a lesson plan titled Genderbread Person and LGBTQ Umbrella, kids as young as kindergarten are taught all about sexuality, ala 2019.

“LGB all represent sexual identities. And the T represents a gender identity, as well as an umbrella term for many gender identities. Queer means different things to different people, for some it describes sexuality, for others their gender, for others both. When we say “sexual identities or sexual orientations” what we are talking about are the ways we categorize and define who we are attracted to, romantically, sexually, or otherwise. When we say “gender identities” we are talking about the ways we categorize and define our genders….”

Gender is now being taught as 3 distinct parts of us. In the curriculum, the authors state:

“Gender is best understood when broken up into three parts: gender identity (which is how you, in your head, define and understand your gender based on the options for gender you know to exist), gender expression (the ways you demonstrate gender through your dress, actions, and demeanor), and biological sex (the physical parts of your body that we think of as either male or female). Let’s talk about these one-by-one.”

Today we are going to focus on how they define “gender identity.”

1. Reality is in our heads?

Focus on the phrase “ how you define your gender based on options that you know exist.” If reality is based on what I’m aware of in my head at any particular moment, it is not reality. I didn’t know a creature known as a slow loris existed until I saw this fabulous youtube of one being tickled. However, just because I had no concept of it in my head prior to seeing that video had no bearing on whether or not the slow loris was a part of our world’s reality. Reality is independent of what I’m aware of in my head. The Genderbread curriculum is teaching our kids the opposite. Objective reality can change depending on what is available in my head. And make no mistake, that is where this kind of curriculum is headed—to remove gender from the realm of objective reality to subjective preference or experience.

In logic, the law of identity states that a thing is itself and not something else. For example, an apple is an apple and not an orange. Twelve equals 12, not 24. According to the Genderperson curriculum, identity is not set. It is based on an individual’s current perceptions. And if those perceptions change, then a person’s identity changes. Essentially, an apple can turn into an orange, as soon as it becomes aware that oranges exist…metaphorically speaking…if fruit were conscious.If reality is based on what I’m aware of in my head at any particular moment, it is not reality. Click To Tweet

In chapter 4 of the Mama Bear Apologetics book, we talk about something called “linguistic theft” which is used as a tactic to advance an unbiblical ideology. “Linguistic Theft refers to purposefully hijacking words, changing their definitions, and then using those same words as tools of propaganda.”1Ferrer, Hillary. (2019). Mama Bear Apologetics: Empowering Your Kids to Challenge Cultural Lies. Eugene, OR: Harvest House Publishers, p 63.

So, I decided to look up the definition of “identity.” The first definition given is the traditional definition:

Both those sound about right. But what dictionary is this? I can’t tell. Let’s check out Merriam-Webster’s definition:

If identity is what a person really is, and what a person really is, is defined by their psychological state, then we cannot tell people in the midst of depression that they are not worthless. They feel worthless, and according to this definition, they are worthless—because that is the “relation that has been established by their psychological identification.”

4. This is completely regressive gender stereotyping

Further along in the curriculum, it states:

“Gender identity can be thought of as the aspects of man-ness and woman-ness you either do or don’t align with.”

Who defines this “man-ness or woman-ness”? And if there are a bunch of different definitions, then how could a child possibly know which they align with? Don’t worry. The Genderbread curriculum will define it for you.

“In this case, we are talking about the norms (social expectations), and roles (ways we fulfill or act out those expectations) placed upon “men” and “women” in a society. A few typical norms of man-ness might be “strong-willed, logical, athletic” and a roles of “leader, builder, protector.” For woman-ness, we might think of the norms “empathic, sensitive, caring” and roles “teacher, caretaker, supporter.””

Raise your hand if you have a daughter who is strong-willed, athletic, and logical, and maybe a bit scant on the sensitive caretaker role? (My mom should be raising her hand right now.) Is there a trend for guys and girls to fit into these roles? Absolutely. Does it change their gender if they don’t? NO! This curriculum is literally telling your sensitive son who wants to be a nurse that he is actually more of a woman, and your athletic, leader-oriented daughter that she is actually more of a man. (Didn’t the feminists take on this gender-stereotyping back in the 80’s? Have we really regressed to such one-dimensional definitions of man and woman?)

Furthermore, if gender identity conforms to society norms, then according to this definition, a person’s gender can theoretically change when they travel. (I’m not saying that this is what the Genderbread Person curriculum is teaching. However, I am saying that this is a logical conclusion that cannot be refuted by their definition.) If gender identity is based on “norms”, we cannot ignore that masculine and feminine norms are different in different countries. There are cultures where it is considered a lot more acceptable for a man to be sensitive, to cry, or be emotional. Ask your kids—does this mean that an emotional and sensitive person is more feminine in America and more masculine in… I don’t know… Italy? (**Disclaimer**I am only speaking from my husband’s comments while watching the Italian soccer players. Apparently they are overly dramatic when it comes to fouls?)

5. What does the Bible have to say about this?

First off, we need to be clear that scripture speaks of two genders from Genesis to Revelation. Jesus even reaffirms this in Matthew 19:4. There is not a single instance in Scripture of a male or female identifying with the opposite gender once they understand what is expected of them in culture. What do we see? We see people defying gender stereotypes all over the place. Deborah was a female judge. David danced naked, played the harp, and cried a lot. The Proverbs 31 woman is a complete entrepreneur. No seriously. Read her resume. She’s a beast in the best way possible.

God has poured out His gifts on both men and women, and He doesn’t discriminate based on gender. If you have a child that conforms to gender-norms, praise them for their qualities! If you have a child who doesn’t conform to gender-norms, praise them for their qualities. Reinforce that God has made them logical or empathetic, athletic or artistic no matter if they were born a boy or a girl. Reinforce the ways that God has created them male and female with these characteristics.

And I don’t feel like I am overstating the case when I say that we need to be reinforcing this healthy view of their gifts and gender multiple times a week. Does that sound like overkill? I guarantee you that our kids are getting the opposite message way more than that.