Genderbread Person Part 2: Gender Expression (And maybe how we got to where we are now?) 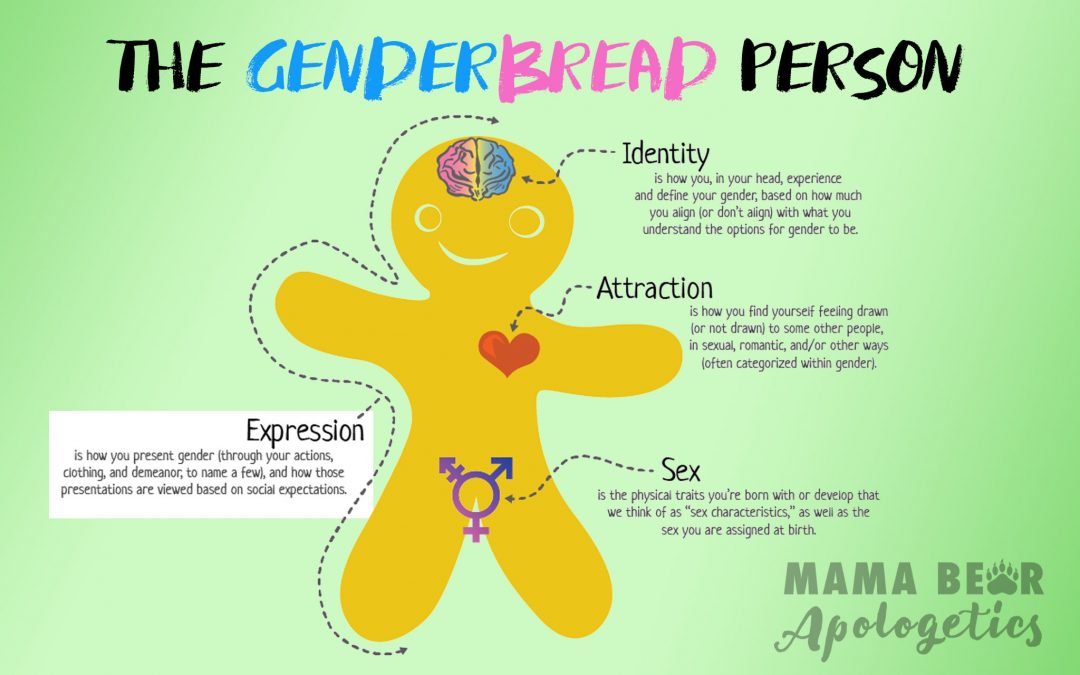 As I studied this aspect of the curriculum, I had some genuine “aha” moments that at this point are just theories. So let’s be clear: I am not stating verified research here. I am trying to connect the dots. These are more observations than they are conclusions and I welcome your thoughts. Agree? Disagree? Partially agree? Are there any aspects you think I might be leaving out? We’re going full interactive on this one.

Review of the Genderbread Curriculum

In the genderbread worksheet, intended to help educators teach children about gender and sexuality, the author states,

“Gender is best understood when broken up into three parts: gender identity (which is how, in your head, you define and understand your gender based on the options for gender you know to exist), gender expression (the ways you demonstrate your gender through your dress, actions, and demeanor), and biological sex (the physical parts of your body that we think of as either male or female.)

In our previous discussion, we talked about identity. Today, we are going to dissect the “gender expression” part of the curriculum.

Gender expression can be thought of as the aspects of masculinity and femininity you display in your clothing, grooming, speech, actions, demeanor, and more. As examples, masculine dress might be considered baggy, umprimed, or functional. Feminine dress is form-fitting, colorful, and frivolous.”

My first thought: This is a really schizophrenic view of gender

I mean, whatever happened to just being a good, ol’ fashioned Tom-boy (a girl who had more traditionally masculine interests and energy levels and hated wearing dresses)?  Why do we have to separate our genders based on fashion and grooming? When I was a teenage girl, we called that our “mood.” What mood am I in? Am I in a cargo pants and Doc Martens mood, or a slip-dress and sandals mood? If I had to wrestle with being told I had different gender expressions on different days… good grief. I would have grown up so confused.

My second thought: ohhhh… I think I get it now.

If I had finished my thought above it would have sounded like this: “Why can’t we just have tom-boys and uh… and… uhhh… and……….uhhhhhhhh

Oh. I think I see the problem now.”

What about the boys? When I was growing up, what options did they have except being a Mr. T wearing, tyrannosaurus rex loving, G.I. Joe backpacking, rough and tumble boy? They didn’t. Sure, there were boys that didn’t fit the stereotype, but they were often relegated to the sidelines in terms of status (i.e. band nerds, etc.). They didn’t fit the mold, so they lost punches on their man-card, whether or not it was stated verbally or not. (Often, it was “stated” physically in the form of bullying.)

In my parent’s generation, boys were boys, men were men, girls were girls, and women were women. No ifs, ands, or buts. Even the girls’ softball team wore dresses to school every day. Everyone was equally shoved into a gender-conforming stereotype. You fit in—or you became a pariah. (I think of Eugene from the first Grease movie.) But that all started to change in the 80’s with third-wave feminism.

It was pretty awesome to be a girl in the 80’s as opposed to previous decades. Previously, boys and girls were equally (and sometimes forcefully) smooshed into their gender stereotype box. Starting with third-wave feminism, all that changed. We girls were told early on that we could be a.n.y.t.h.i.n.g. we wanted to be. Dream big! Play sports! Wear pants! Wear sneakers! Home Ec is optional! (No complaining from me yet. Except for the shoulder pads in the 80’s. It was like a weird mix between businesswoman and football player.) Girls had all the freedom of expression in the world. But the boys… nope. They were still shoehorned into their stereotype—or mocked mercilessly if they failed to conform.

Can we all just take a deep breath and recognize how incredibly unfair this was for little boys who loved to dance, or paint, or sing…or shower on a regular basis? To be treated like they were less of a boy, and later less of a man?

Where we tried to make it right

My husband disagrees with this point, so I encourage discussion in the comments.

I think we tried to fix this inequality by creating a new category, but it was too little, too late. The category I’m referring to is “metrosexual.” The metrosexual movement was for guys who liked to groom themselves, shower, and wear nice clothes, but who didn’t self-identify as homosexual. These guys were often artistic, musicians, philosophers who loved craft brew, specialty coffees, and beard grooming products. They put the man in manicure. The metrosexual movement made it acceptable to be refined and artistic, without sacrificing one’s perceived masculinity. (Just look at all the youth pastors and worship leaders who adopted the “skinny jeans.”)

Thinking back with the perspective I’m having right this minute, this was probably a really healthy movement. It was the first step we’d ever taken in allowing guys to express themselves in a legitimately masculine way that would have otherwise be seen as feminine (i.e. tighter, colorful, sometimes frivolous clothes, grooming products, softer speech, etc.).

When a person is backing away from some ideology—in this case, rigid gender stereotypes—they often back into something worse. In our society right now, people have backed into an outright denial of gender as an objective fact about a person and turned it into this messy, fluid, confusing, daily-changing spectrum that will leave even the strongest of kids confused about who they really are.

Parents, I cannot stress enough how damaging this can be to your child’s sense of self. I’d like to give you all the steps to address this with your kids right here, right now. But honestly, there is someone who has already done it and has done it way better than I. So (with permission), I am reposting her article right after this one. It is by Sue Bohlin and it is titled Raising Gender Healthy Kids.

So what am I really trying to say here?

1 – As long as girls and boys were equally forced to abide by gender stereotypes, there was at least equal “oppression”, (if you even want to call it that) and there weren’t major problems. Society still functioned fairly well with people fulfilling their roles.

3 – There has been no male counterpart to feminism. Women were told to enter all the male-dominated spheres, and men were told to just get out of the way without providing other avenues for them to go. Rather, in schools, boys are told to act more like girls–sit still, don’t move, work in teams, don’t compete, be more in touch with your feelings.

4 – When third-wave feminism came out, the girls were liberated in their gender expression, and femininity was allowed to be fully expressed across the entire gamut, but masculinity was not.

5 – Instead of opening up the box to allow a larger gamut of masculine expression, alternate expressions of masculinity were deemed “feminine,” which has left a generation of boys gender-confused.

6 – Instead of broadening the gamut of masculine expression, we have tossed the baby out with the bathwater and changed the words “sex” and “gender” from synonyms and made them into two separate aspects of identity. Let’s be real, the word “gender” was basically introduced so that we didn’t have to say the word “sex” over and over again. That word has too much baggage to discuss with a room full of 6th graders.

7 – Now, man/male and woman/female are no longer synonyms.  Sex is your biology and gender is your identification, as if those two could be separated. It has removed the gender aspect of biological sex from the realm of objective reality to subjective identification.Instead of broadening the gamut of masculine expression, we have tossed the baby out with the bathwater and changed the words 'sex' and 'gender' from synonyms and made them into two separate aspects of identity. Click To TweetLet's be real, the word 'gender' was basically introduced so that we didn't have to say the word 'sex' over and over again. That word has too much baggage to discuss with a room full of 6th graders. Click To Tweet

Put all of these together, and does the current sexual identity crisis start to make a little more sense? We can sit back and critique what we think is right or wrong, but as Dennis Prager often says, “Clarity over agreement.” We may not agree, but maybe we can get a little more clarity on how we got here.