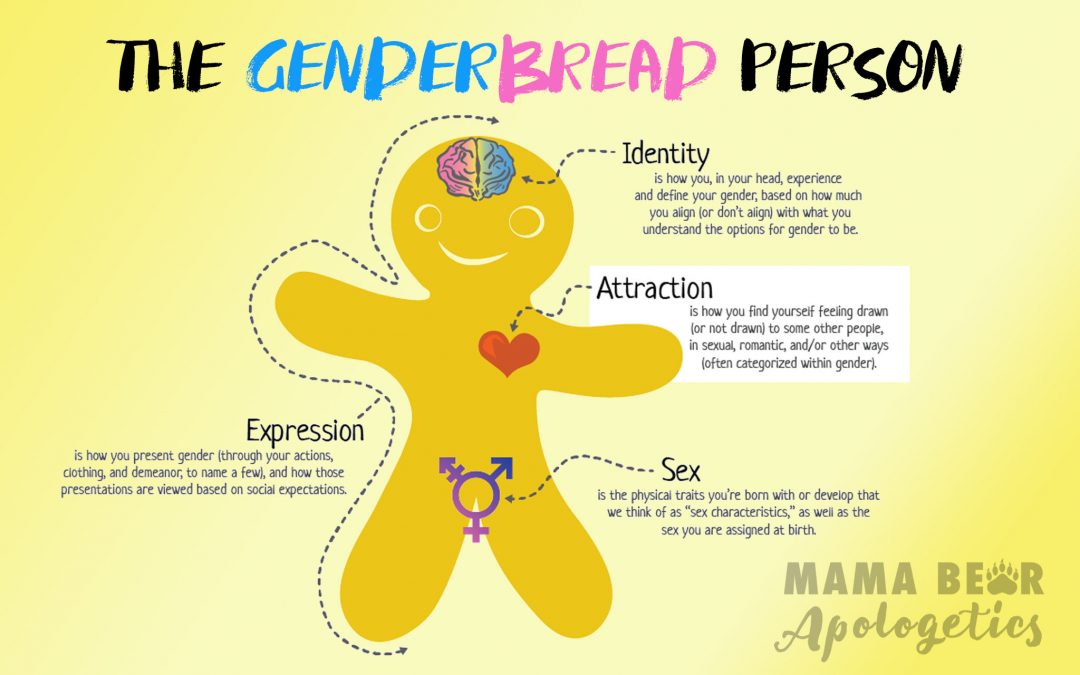 In the final installment of the Genderbread Person series, we will discuss attraction. (See parts 1, 2, and 3 of this series here: gender identity, gender expression, and biological sex)

This article will probably be the most confusing out of all the Genderbread identity articles, but in order to help our kids navigate this landscape, we must know what they are being taught in school. I don’t promise that this one will be an easy ride. Find yourself a quiet spot, maybe bring along a notebook to make diagrams, and let’s look at the Genderbread Person’s definitions of attraction and break the concepts down one by one. In regard to whom one is attracted to, the Genderbread Person says: Does desiring emotional intimacy with someone mean that they are sexually or romantically attracted to the person? #apologetics #healthysexuality Click To Tweet

We have two related ideas here. On the left of each we have “nobody,” meaning no feelings of attraction. On the right we have “men/males/ masculinity” and “women/females/femininity.” Sexual attraction can be thought of as the want, need, or desire for physical sexual contact and relationships. Romantic attraction is an affinity and love for others and the desire for emotional relationships. Some folks have both, some folks have neither, many experience more of one than the other. Sexual orientation is all about who you are physically, spiritually, and emotionally attracted to (here we’ve broken it out specifically into sexual and romantic attraction), and the labels tend to describe the relationships between your gender and the gender types you’re attracted to.[1]

See the diagram below:

Sexual and Romantic Attraction according to the Genderbread curriculum, created by Sam Killerman.

We have lost the concept of friendship

In this curriculum, sexual attraction refers to the gender with whom you want to be sexually active. Romantic attraction is the “affinity and love for others and a desire for emotional relationships.” I don’t mean this in a condescending way at all, but this is what friendship is—having an affinity toward another person whom you love and with whom you would like to have an emotional relationship. Maybe I’m just speaking for women here, and guys would define friendship as “who you want to hang out and do stuff with.” Either way, we need to emphasize to our kids that desiring an emotional relationship with someone does not change their sexual orientation. Even loving someone does not mean that we are in love with them. You would be surprised at how confused many kids are regarding this concept. What has happened to our understanding of healthy, platonic, same-sex friendships? #apologetics #healthysexuality Click To Tweet

Friends, we were created by God for relationship, and healthy relationships include an emotional component. If our kids are buying into the propaganda that a desire for an emotional attachment with someone of the same-sex means that they have a same-sex sexual orientation, then be prepared for a lot of confusion. Healthy relationships begin with healthy same-sex friendships.[2] We cannot take a normal desire and make it a predictor of abnormal sexual identity. By this definition, everyone is romantically attracted to their best friends.

Be aware that this very normal desire for emotional intimacy within a platonic relationship is being reinterpreted as romantic and sexual attraction. I have even seen this desire become over-exaggerated among kids who have experienced a tenous or lost relationship of a same-sex parent. Their need to emotionally bond with the same-sex parent overflows into their same-sex friendships. This is an understandable reaction for a kid who is missing a crucial parental relationship. But this intense desire is now being interpreted by well-meaning educators (and not-so-well-meaning media) as a sexual desire when it is not necessarily so. Granted, the desire can become sexual, but our kids should not think that one necessarily has to follow the other. Having a larger-than-average need for same-sex friendships does not make someone gay. Having a larger-than-average attraction toward someone of the same-sex does not necessarily mean that this desire is romantic in nature. Our kids are not being taught this. At least they aren’t being taught this in school. And often youth groups don’t venture beyond questions like “How far is too far?”

But before we can even talk about gay or straight, we must first understand these terms according to the Genderbread curriculum.

Before we go further I must point out that this statement cannot make sense if we have already redefined what it means to be a man or a woman.

According to this statement of attraction, we need to know what we ourselves are and what the other person is in order to even put a label on our sexual identity. However, as we’ve seen in previous articles about the Genderbread Person (specifically the one on gender identity), this curriculum has sawed off the branch it is sitting on. If one’s gender is determined by subjective and mental associations that can be fluid throughout life, then we have lost the ability to identify who is a man and who is a woman. And it is “impossible” for us to determine what someone else is apart from their informing us. We cannot even call someone gay or straight unless we are willing to commit to a definition of male and female! #apologetics #healthysexuality Click To Tweet

The word lesbian—a woman who is predominantly interested in sexual activity with other women—has no meaning unless we know what a woman is. I think the authors of the Genderbread Person foresaw this issue because they say:

This is getting a bit confusing, so allow me to make a cheat sheet here:

How do we address this with our kids?

Your eyes may be swimming with all these new definitions, so let’s break this down into some bite-sized chunks. What do we need to emphasize to our children?

1. We were created for relationship.

This entire curriculum completely leaves out the concept of relationship with other people outside of romantic and sexual. It gives a range of orientations, but none of them leave room for healthy same-sex friendships. Our God exists eternally in relationship within the Trinity, and He created humankind because He desired (not needed) a creation with whom He could relate. Family is an institution even older (and more foundational) than the church. Our kids need to know that the kinds of relationships they form do not define their identity. Rather, as children of God, our identity is rooted in relationship itself. We were created by a relational God for relationship. Our identities are not defined BY our relationships. Our identities are rooted IN relationship. #apologetics #healthysexuality Click To Tweet

2. Help your kids distinguish between the different kinds of love.

It is fairly common for some kids to get confused as to what kind of love they are feeling because our society has taught them that all strong feelings of love have a sexual component (i.e., eros/romantic love). This misconception can be easily fixed if we help them understand the different categories of love, especially platonic love (or phileo in Greek). Let them know that sometimes our attraction for another person is really out of respect for traits that we see in them, even traits that we wish we ourselves had. That doesn’t make them gay. Those traits can even be physical beauty. We are by nature attracted to beautiful things, but appreciation for beauty does not equal sexual attraction. Our society will tell them that any strong feelings of love they feel automatically mean that they are sexually or romantically attracted to the person. No. They don’t.

Take a look at C.S. Lewis’ book The Four Loves. I can’t remember if it’s a hard read or not, but here’s a study guide for it. When you are watching TV or coming home from a movie, discuss the different loves that you saw. The more you talk about the distinctions between the different loves, the less your child will be confused about their own feelings of love. The different categories will already be in their minds. If your kids don't know the difference between the different kinds of 'loves,' they can easily be confused. Eros is not the same thing as phileo. #apologetics #healthysexuality #fourloves Click To Tweet

3. Distinguish between the different kinds of touch.

We also need to be clear with our children that we were created for physical contact. In fact, babies in the neonatal ICU are able to leave more quickly when a person engages in “touch therapy” with them.[3] There’s even an organization to help you get certified in it! Just Google “therapeutic touch” or “touch therapy,” and you will see a bevy of research articles about the physical benefits of touch. There was even an article I read a few years ago about the crisis that boys are experiencing now that the category of platonic touch between men has been removed. Psychology Today calls it “Skin Hunger.”

When I was a kid, we had roller-skating parties. The DJ always played a “couple’s skate only” song. It never once occurred to me or any of my friends that when we picked a friend to hold hands with during the couple’s skate that it might mean that we were anything other than friends. It was a couple’s skate. We were two people. We fulfilled the requirement. Let’s hold hands and skate!

This is a luxury that our kids no longer have. I’m a really touchy person. Just ask any of my close friends or family. I’ve hated how my innocent instincts for snuggles and physical touch have been perverted by society. Before my sister had cancer, we got to the age where she wouldn’t hold my hand in public because she didn’t want people to think we were a “couple.” As her sickness got worse, I think she got over it and unashamedly held my hand in public. It was wonderful… But I have to admit that even I felt self-conscious sometimes when I could tell people were looking at us and wondering what our holding hands meant. I just chose not to care and held her hand anyway, and I don’t regret it—especially now that I can’t hold her hand anymore.

4. Do not confuse the LGBTQ+ agenda with LGBTQ+ people.

I know navigating the landscape of gender and sexuality can be daunting. I hope this series on the Genderbread Person has helped prepare you to preempt some of the issues that are being taught to your children. God created us, male and female He created us (Genesis 5:2). Together, we reflect the imago dei (or “image of God”) in a way that man and woman cannot on their own. We need words and categories to defend this imago dei to our kids, and we need the care, tact, and understanding to model healthy relationships to a world that is, frankly, starving for love. Yes, the LGBTQ+ agenda is concerning. It seeks to normalize sexuality that mars the imago dei in which we are created. But this is the most important point of all: we cannot treat this agenda with the love and grace that we are to give people. We should not support an agenda raised against the knowledge of God. But do not confuse the agenda for people. We are called to love all. No matter their understanding of sexuality and gender. We are called to love people and demolish bad ideas. May we NEVER mistake the two. NEVER mistake the way we treat an agenda with how we are to treat people. We love. Period. But we don't mindlessly swallow agendas raised against the knowledge of God. Do not confuse the two. #apologetics #healthysexuality Click To Tweet

While this is far from comprehensive, I hope this gives you at least a start for how to address these confusing topics with your kids. Because if you don’t, Mama Bear, I guarantee the culture will.