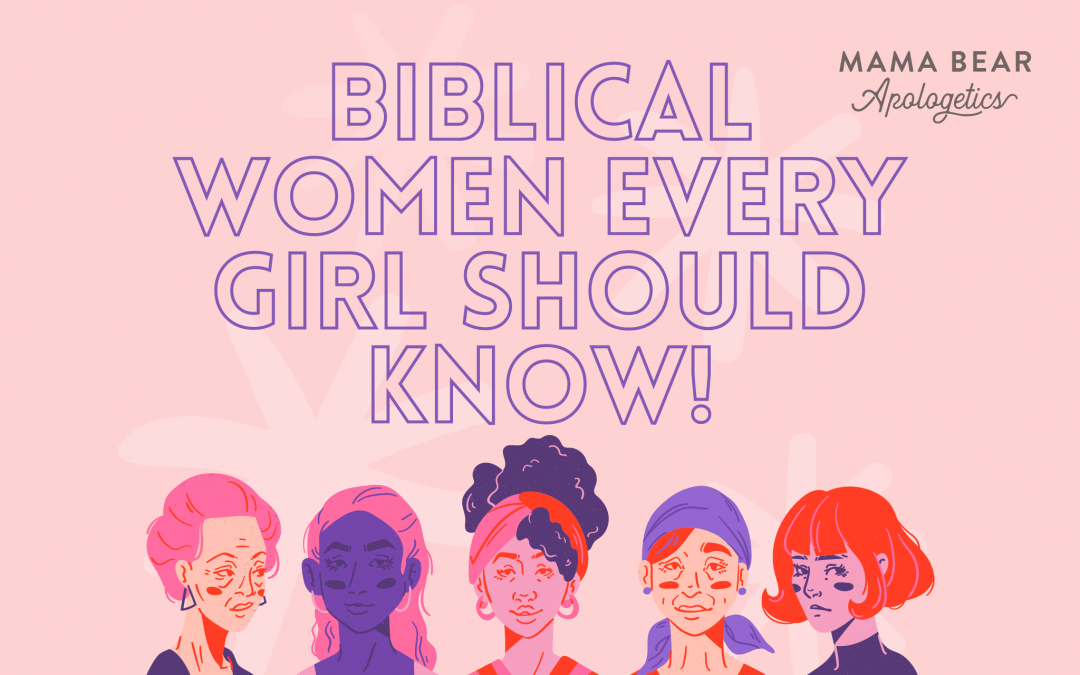 Not too long ago, a fellowship ad in our church bulletin caught my eye. It was for what appeared to be an adult version of church camp. I’m talking confidence course, archery, paintball, cool speakers, the works! It looked a-mazing.

I whipped out my phone to find the sign-up link… but then the last line of the ad deflated my camp dreams: the event was for men only. Turns out, Lindsey (our executive director) has had similar situations happen to her: there was a barbeque advertised in her church bulletin, and she was so disappointed it was for men only.

If you’re like a lot of us ladies in the apologetics community, the church’s take on Christian womanhood can feel a little…frustrating. All too often, womanhood is presented as delicate luncheons, emotion-focused Bible studies, and Insta-gramming the latest addition to our cross wall.

This ad got me to thinking about all the little girls who don’t quite fit the commonly perpetuated frilly mold of Christian womanhood. When being a woman of God is all bake sales and lace, they may feel like they don’t have a place in the church.

Mama Bears, if we want to empower our girls, they need to know that biblical womanhood is diverse. Need proof? Good, I was hoping you’d ask. Let’s take a look at some leading ladies that need to make a serious comeback within the church.[2] When our girls don't feel like they fit into the right Christian-woman-mold, they mistakenly get the impression that God can't use them. Let's bust some of those old stereotypes. Click To Tweet

One amazing woman in the Bible who broke societal norms was Joanna. As the wife of the steward for the tetrarch of Galilee, Joanna would have been a woman of wealth and influence. But instead of being the Tiberian[8] version of Lady Catherine, her devotion to Christ meant that she often left the comforts of home to support the ministry of Jesus.

One of the great things about Joanna was that she had a knack for organization, and she wasn’t afraid to get her hands dirty. As one of the witnesses to the crucifixion and resurrection of Jesus, she also had to be brave in the face of persecution.

Our girls need to know that it doesn’t matter if you have a little, or a lot — all girls can work. Joanna and her family made great sacrifices so that she could go out on mission. Foster the little Joanna in your girl with opportunities to bless others.

If you have a little Joanna on your hands… foster her work ethic to the glory of God’s kingdom. This could be through donating funds from a lemonade stand, adopting a child in another country through a program like Compassion, going on a mission trip, or serving within her local church. Wealth shouldn’t be seen as something that keeps frees you up from work, but the opportunity to put to work the blessings that God has given you–for His Kingdom.

As a military vet, I love me some Deborah.  Deborah was the prophetess who led Israel while they were held captive by the Caananite king, Jabin. (Read about her in Judges 4). She wasn’t “in charge” because all the men of Israel were too dumb or disobedient to lead. She was in charge because she was the best person for the job, and God selected her to lead. Her title says it all: Deborah, prophetess, wife of Lappidoth. It shows her devotion to God first and family second. Exactly the way it should be for any married woman.

She was such a pillar of godly strength and wisdom that when she told the military commander Barak to lead the Israelites out of bondage, he wouldn’t go into battle without her. So, off to battle she went, shouting praises to God and encouragement to the warriors, and they kicked Sisera’s tail. (Or rather, they kicked his soldier’s tails while Jael speared him with a tent peg. This one battle is like the most biblically #girlpower story in Scripture!)

If you have a little Deborah on your hands… give her opportunities to use her discernment skills on life and faith issues. Work in some apologetic ‘disputes’ like, “What would you say to a friend who tells you that Jesus was just a nice teacher but not the Son of God?” It’ll liven up the daily tussles about whose turn it is to play video games. She may struggle with over-involving herself in others so make sure she knows that not every battle is hers to fight.

Jael doesn’t have a long part in the story of Israel’s victory over Sisera, but boy, does this girl make an impression! When all of Sisera’s troops had been wiped out by Barak and his crew, Sisera ran and hid in the tent of Jael. Between Deborah and Jael, this one battle is basically the most biblically #girlpower story in Scripture! #womeninthebible #Jael #Deborah Click To Tweet

This seemed like a great hiding spot since Jael was the wife of Herber, who just happened to be buddies with Sisera’s king, Jabin. What he didn’t know was that Jael was still allied with Israel and God.[4]

She knew exactly what to do when Sisera showed up. She got him all cozy, gave him some warm milk to make him sleepy, and then staked that dude’s head to the ground while he slept. This chick didn’t play around.

Girls need to know that one of the best traits about Jael is that she wouldn’t let her loyalty to God be swayed by those around her. She stood firm in the faith and as a result, she was a key player in Israel’s battle success that day.

If you have a little Jael on your hands… she’ll have no problem standing firm for God. But one area she may struggle with is tact. Encourage her to channel her passion by using her words (not spikes) to navigate troubles with grace and patience (Col. 4:6). This helps her understand that metaphorical tent spikes are only a sometimes weapon. Most of time, they’ll serve as a tool to help shelter the ones she loves from outside storms — a trait every girl (and boy for that matter) needs to take to heart.

All girls can take great encouragement in the legacy of Priscilla. This woman had a heart for worshiping God with her mind coupled with the spiritual gift of discipleship. Talk about a great combo! What sets Priscilla apart is the way that she discipled others.

She didn’t make Apollos[5] feel stupid for not knowing everything. She didn’t make a scene or embarrass him in front of a crowd. Instead, she gently pulled him aside as a fellow believer and journeyed alongside him to help him know Jesus better.

One of the key things our girls need to know is that just because they have XX chromosomes doesn’t mean that they should check their brains at the door. Nope. Some of the greatest Christian thinkers, philosophers, scientists, and apologists have been, and continue to be, women.

If you have a little Priscilla on your hands… she probably loves to learn as much as she loves to share what’s she’s learned with those around her. Sometimes these traits come out (in their unredeemed form) as bossiness. She loves to teach others what she has learned, a trait that is not always valued from women. Let your girls know that God can use them in helping evangelize and disciple others in the faith. But it’s also good for her to be able to recognize the warning signs when her advice is not welcome.

If I can channel Elizabeth Bennett from Pride and Prejudice for a moment, Dorcas must have been one impressive woman to behold. Her name means gazelle, which perfectly captures the way in which she served the neediest around her: the widows and orphans.

When we read about Dorcas (or Tabitha in Greek), there are two things we aren’t told: her age and her family lineage. Perhaps you were taught that Dorcas was an old lady, but if you ask me, I bet this gal was younger than we think. She also appears to be single.

I highlight these two points for a reason. Many women are led to believe that the best way they can serve the Kingdom is by getting married and making babies. Not true. Our girls need to know that they don’t need a ring on it to be great ambassadors for Christ. Nor are they any less valuable as members of the church because they graduated school without their MRS degree.

Biblical womanhood is a beautiful thing and it is distinct from manhood. But as these ladies from the Bible show us, there is enough variety within biblical femininity that all girls can find their own place to flourish.

Perhaps we can serve our girls best by showing that womanhood doesn’t come in just one style.

Why not take that Lady Crawley wit and toss in a paintball course or two? We could call it “ReLoad.”[9] We spend the weekend diving into the apologetic, metaphysical, and theological evidence for the faith and then foster some boldness with zip lining, ropes course, and food that won’t fit on a cracker….along with some food that would. Cuz cucumber sandwiches rock, y’all!

[1] For the record, I love Downton Abbey. I also love tea and tea parties, but variety would be nice for our ladies’ activities.

[2] This is by no means an exhaustive list. In fact, while I am working on the boy’s version, I’m already thinking of another five ladies our girls should know. So, if I didn’t cover one of your favorites…stay tuned!

[3] Just like how Deb told Barak that his dependence on her, instead of God, would mean that a woman would get credit for the battle’s victory.

[4] Herber was part of the Kenite tribe that was originally allied with Israel, but he defected over to Jabin, probably because the Canaanites were in power.  His wife obviously didn’t share his loyalties.

[6] You can read about  this in a previous blog here: https://mamabearapologetics.com/apologetics-needs-women/.

[7] I realize that I am hitting a touchy subject here, especially pertaining to what positions a woman can hold to teach. There is a huge ongoing debate on this issue, which I purposely did not address here. Regardless of where you stand on the complementarian/egalitarian debate, our girls need to know that they can use the gifts God gave them to build up other believers. Priscilla was respectful of the custom of her time and taught alongside her husband, Aquilla. I think we, too, should be respectful of the needs and convictions of others and seek peace whenever possible.

[8] It is believed that she lived in Tiberias, the capital of Galilee.

[9] I’m totally trademarking this btw, so no stealing 🙂