Explaining the “Science vs God” Myth to Kids 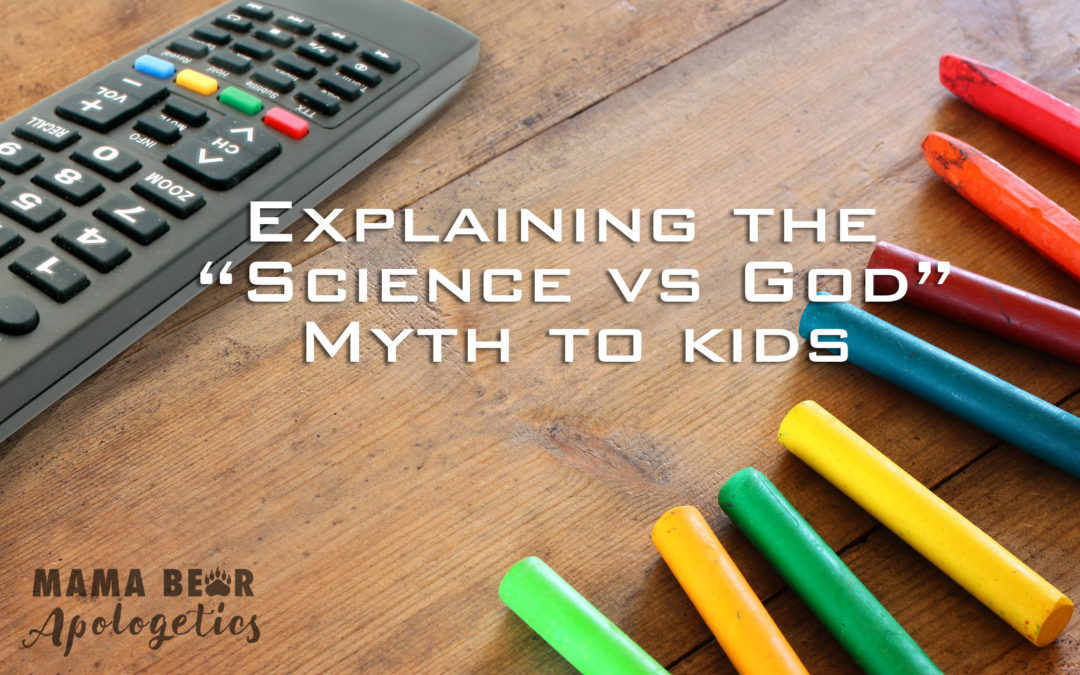 Too many times, kids are fed the narrative that science and God are enemies. This may happen so frequently that they accept it as Gospel truth without questioning the premise. As a former college prep Biology and Chemistry teacher, I wholeheartedly disagree. And frankly, I’m appalled at the number of Christians who have bought into this lie.

I  am currently in my final semester (God willing!) for my Masters in Biology.  I am all too familiar with the devastation occurring in the sciences – namely this unnatural hostility between science and God. The argument could be summed up as this: if phenomena can be explained by science, why do we need God?

The implicit assumption is that God is only relevant if we cannot figure out a physical explanation for a phenomenon. Parents, this is a dangerous trend. If this is our view of the relationship between science and God, then our need for God diminishes with each scientific breakthrough. Thankfully, I don’t think this is a correct relationship. Nevertheless, the misconception that God and science are at odds with one another persists.

There are 2 common reactions to this problem – both equally disastrous. The first reaction is by those who decide that theology wins; we must batten down the hatches and find a way for God to win the war by creating an entirely new division of science. Often this group encourages kids to question every conclusion of mainstream science that does not agree with their interpretation of scripture. They then create an entirely new set of scientific rules, guaranteeing that God’s word comes out on top. Crisis averted! While I applaud this group for sticking to their principles and championing the cause of Christ, I don’t think the overall effect is positive for the critical thinkers once they leave the Christian bubble.

The second reaction is to embrace all of mainstream science without question. At best, these individuals do serious hermeneutical gymnastics to make scripture compatible with everything secular scientists say. At worst, they close their eyes and swallow everything that is fed to them while mentally chanting “But I still believe in God… But I still believe in God” In the end, cognitive dissonance mounts until you get oddball statements like “I’m not an evidentialist.” (An actual argument I heard at a lecture once when I tried to talk about scientific evidence of design.)

So what is the solution? We can’t deny that there are people in mainstream science who ARE claiming that physical explanations shortcut the need for a creator. However, what they fail to acknowledge is that a description is not the same as an explanation. There are a few quick exercises that I believe can be very helpful in illustrating this distinction to kids. But first, we must discuss an important element of nature: teleology.

Teleology is a fancy word for saying that nature appears to have goal-directedness. Goal-directedness could be anything from “Why do atoms want to have 8 electrons in their outer shells?” (Go ahead. Ask your chemistry professors. They can’t tell you.) Or “Why do organisms want to survive?” or “Why do ecosystems naturally balance themselves?” Even Richard Dawkins (atheist guru himself) readily admits that “Biology is the study of complicated things that give the appearance of having been designed for a purpose.”

I have not taken a single biology class where teleological language was not smuggled in. The funniest example was in my “Plants” class, where the professor kept saying that plants “learned” things in evolutionary time – they “learned” how to have seeds, they “learned” how to have vascular systems. Really? They learned these things? I cannot even begin to unpack the scientific difficulties I have with that statement.

“Mechanics” (i.e. description of what is going on in nature) and “purpose” (i.e. explanation of why is this going on) are two very different concepts. Sadly, they tend to get lumped together in the sciences. (This is the unfortunate result of science being divorced from philosophy.) We can describe the elements of nature all day long (mechanics), but no amount of study of physical properties will ever answer the question of why (purpose). Our descriptions barely even scratch the surface of how!

So, to teach your kids about teleology, tell them to do something simple. Give them the remote control to the TV and tell them “Change the channel.” Afterwards ask them, “What changed the channel? Was it you, or was it the remote.” Or, if you have a student that likes to color, watch them color for a while and then say “That’s a beautiful drawing! How did the picture get onto the paper? Was it you, or was it the crayon?”

This can be repeated with a myriad of other activities. Expect looks of confusion. Your student will probably think you have lost your mind because the obvious answer is BOTH. The channel was changed both because they pushed the button and because they had a working remote control. An effect must have a cause, and the cause must come from outside the system. An engineer could explain the physics and design of a remote control all day long, but that will never answer why the channel got changed at the particular moment that your child wanted to change the channel. Similarly, we could probe the scientific depths of Crayola crayons, and no amount of physical explanation will ever explain how the words “I love Mommy” appeared on the paper. You must have an intention (i.e. teleology)

The more I study cellular functions, the more I realize that one has to choose to miss the fact that all of life is a series of micro-machines with goal-directedness that cannot be explained by the physics, chemistry, or biology of the system. If we can get our youth to understand these differences before they enter the materialist indoctrination camps of mainstream academia, the less likely they will be to drink the kool-aid when it is offered to them. And notice, I didn’t have to study any kind of “special” Christian science to see this obvious truth. Studying natural complexity is totally sufficient when coupled with a Biblical lens reminding us that “in Christ, all things are held together.” (Colossians 1:17) Scientists might call it the “strong nuclear force,” but that’s just fancy terminology for “it holds together and we’re not sure how.”

Can you think of any other good analogies or activities that would help kids understand the differences between natural processes and teleology? Tell us about it in the comments!