Enneagram Shaming is Not the Way Forward 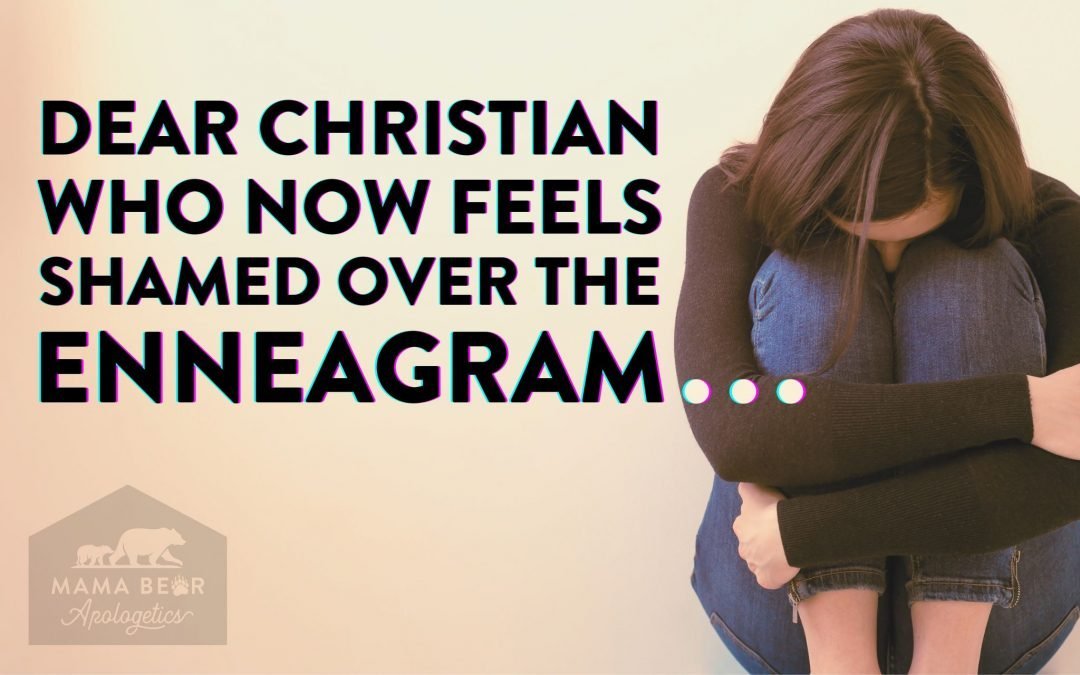 We interrupt our regularly scheduled 3-part series on the Enneagram to address some hurts that may be caused by the timing of this series. We had no idea it would turn into such a cultural moment — thanks in no small part to Jackie Hill Perry publicly announcement about the Enneagram days before we released the first blog. We are still going to talk about the scientific validity of the Enneagram (part 2), and we are still going to do a final ROAR through the Enneagram (part 3). But before we do, I feel a burden to speak to our mama bears who are feeling hurt, ashamed, angry, or even stupid at the sudden outcry against the Enneagram. To you, I want to say: “There is therefore now, no condemnation for those who are in Christ Jesus” (Romans 8:1). Repeat it until you believe it.

There have been a few times in my life when I dabbled in things that I later concluded to be occult. Each time, I forged ahead because there was just enough science (or theoretical science) for me to justify my interest. Each time, in His own way, the Lord made sure that I was no longer able to justify my study. I remember when it finally occurred to me that “occult” doesn’t mean “not true.” It’s not synonymous with “doesn’t work.” Occult means secret or hidden. There are almost always short-term “benefits” to dabbling in the occult. It wouldn’t entice anyone otherwise. Don’t feel ashamed because you were enticed by something that seemed good and true. Know that… Remember: #occult doesn't mean 'not true' or 'doesn't work.' It means hidden (or even forbidden). Click To Tweet

2. God can reap where He doesn’t sow

I have heard from a few friends saying that they felt like the Enneagram saved their marriage. They had gone to church classes and counselors and conferences trying to better understand themselves and their spouses. The Enneagram was like this “aha” moment where they could finally connect. To this, I want to say “Praise God that He reaps where He does not sow!” When a marriage is saved or a relationship is improved, all glory goes to God. God can use all things. However, we need to be aware that this is a grace that was extended to us because we serve a good God, not because God is giving us permission to follow something that is not from Him. And as we saw in part 1, the origins of the Enneagram have all the earmarks of occult activity through trance and automatic writing.

If you have felt helped by the Enneagram, be grateful to God… and move on. As I said in point #1, occult fascination always begins by hooking us in with things that feel true, good, beautiful, or that “work.” Pay attention now to how difficult it is to take the information that God revealed to you about yourself, and disconnect it from the Enneagram. Yes, it may have been during your time studying the Enneagram that you had aha moments. The question is, do you believe that it was the Lord who revealed those things to you or the Enneagram? If you are trusting God, you can trust that He will continue to refine you without any more help from the Enneagram. If you keep feeling pulled back to the Enneagram, ask yourself why? What are you trusting in? Pay attention to how often you still want to assign people a number or how often you excuse something because of your number. This isn’t to shame you. It is to help you realize that there may have been a bigger spiritual stronghold than you realized. Any tool that is truly of God will push us back to Him and His Word, not back to the tool.

How do you help people in your life who are feeling shamed for studying the Enneagram?

I know it can be tempting – especially for those who were uneasy from the start – to yell “HA! I KNEW IT! Told you so!!!” to someone whom they’d previously debated on the topic. But that is not how we as Christians should engage with those who are just escaping deception. Be honest: did you stay away from the Enneagram because you were sooooo much more spiritual or because it didn’t work for you to begin with? We’ve all been deceived at some moment or another. Be kind to others, for you have no clue how long it will be until you will look the fool. Treat them the way you will want to be treated when you are blinded by something that you thought was good. Do not rub each other’s faces in folly. We all need God’s kindness which leads to repentance. Whatever you do, do not make repenting more difficult for someone. Trust me, you don’t want to tempt God to unsaddle you from that moral high horse you’re on.