Ways to Encourage the Papa Bear in Your Life 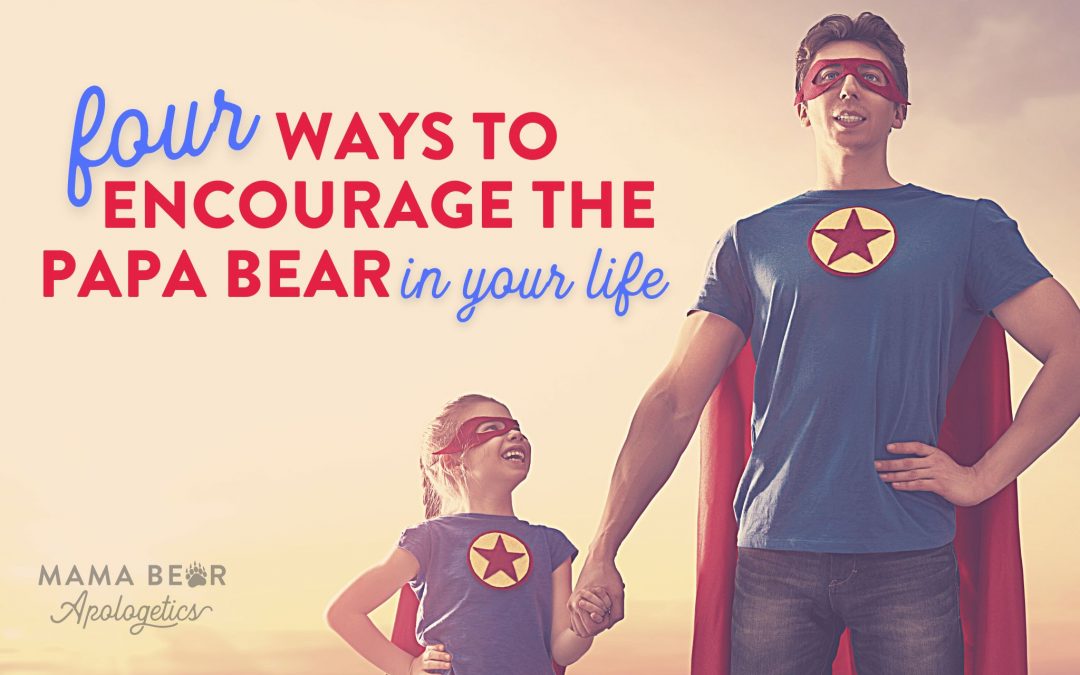 With Father’s Day right around the corner, you’ve got a great excuse to tell the man in your life how much he means to you — because Papa Bears need encouragement, too (even if they don’t ask for it or act like they want it). We guys are supposed to play it cool, be self-assured, and of course, never ask for help. But deep down, the man in your life has insecurities. He gets discouraged. He tries to be strong, to grow, and overcome. But often, he ends up feeling defeated, beaten down, and under-appreciated. Even with all you wonderful Mama Bears loving your man the best you know how, sometimes you may not know how to encourage him in ways that make sense to him.

I’m talking about men broadly, not just biological fathers. And I’m not just talking to married Mama Bears, either. If you’re married with children, then you have at least one Papa Bear in your life who needs this. But if you’re a single woman, chances are there’s a father, brother, son, or trusted male friend in your life who needs some encouragement. So, here are some ideas about ways you can put some wind in his sails.

1. Read his language and let him know when you pick up the message.

I was an adult when I first realized that my dad’s love language was acts of service. Like many men from his era, he has never been much of a talker, especially when it comes to emotions. He still has emotions, and he’s very sensitive in his own way. He even says “I love you” – just not necessarily in those words. He prefers communicating with his hands, in practical service. Once I realized this about him, I was able to release a lot of pent-up resentment I had toward him. I’m a pretty verbal guy. But over time, I came to realize how words are just one way of saying things, and often they’re not even the best way. If the man in your life speaks mainly through words – great. That’s easy enough to work with. But there’s a good chance his primary language is something else like acts of service, or grand gestures, or touch, or quality time, or shared experiences, or remodeling the living room. Respond to his preferred way of communicating affection. Receive those expressions of love like they’re precious gifts to you. Then communicate to him that you received his message loud and clear and that you love him, too.

2. Tell him how much you respect him, and tell him often.

This may sound a bit weird to many of you, but males tend to value respect as much or even more than love/affection. We see hints of this distinction in Scripture: “Let each one of you [husbands] love his wife as himself, and let the wife see that she respects her husband” (Ephesians 5:33). Guys can be deeply insecure and sensitive when they feel disrespected. On the flip side, they can feel like superheroes when they feel respected. Respect is valuable currency for men. Generally speaking, when men feel respected they feel loved enough. A woman’s bucket is often full when she feels loved. To fill a man’s bucket, he probably needs respect.

Men and women often talk past each other here, failing to translate their own values into the values of their spouse. Hillary and I had this problem early on in our marriage. Hillary made some joking comment that felt disrespectful to me. I didn’t laugh. My feelings were hurt. She didn’t understand what the problem was until I asked her how she would feel if I jokingly said, “Oh, honey you know I don’t really love you.” Yikes! That translation exercise cleared things up really quick. She immediately understood the analogy, and we hugged it out.

She has the right to expect me to relate with her lovingly, treating her as the “delicate vessel” that she is (1 Peter 3:7). But that’s something I give to her, not something she demands. It means more as a gift then as an obligation. In the same way, she gives me respect not because I demand it, but because she loves me. And she knows that love, for me, is spelled R-E-S-P-E-C-T. (Sock it to me.)

3. Leave room for him to be your hero, then receive his heroism gratefully.

The man in your life really wants to be your hero. A man’s capacity to be an actual hero is built-up over time through small services, selfless acts, and bits of bravery. Some good examples show up in chivalry: opening doors or walking her to the car at night, etc. Gestures of chivalry are practice for men who aspire to be a knight in shining armor. Around the house, small acts of heroism can be him opening your pickle jar, squashing a bug, or taking your car for a wash. Sure, you can find a way to do those things yourself, but you shouldn’t have to. Other bigger examples might be handyman jobs around the house, watching the kids so she can have some needed alone time (or time with friends), or making career and housing choices to better suit the needs of the family. Whenever a Mama Bear takes care of all these things herself, she can accidentally communicate to her man that he is superfluous, just arm-candy or decoration (or worse, a meal ticket). It’s not a question of whether women are capable of doing all of these things; of course, they are. But will you let him serve you? Men need to be useful in the relationship. They need to know that their strength makes the family better.

Hillary and I have both struggled with this one. At first, when I was a teacher, I would get home and try to correct everything she said instead of just having a conversation with my lovely wife. I didn’t mean to. It’s just that I’d been grading logic, apologetics, and Bible papers. When that’s the mode you’ve been in all day long, it’s hard to switch it off. When Hillary became a teacher, she started talking to me like I was one of her students. She didn’t mean to be “instructing” me, but it still felt that way.

Long story short, we’re all guilty of this. Whatever mode you are in all day is probably your default when you all gather around the table for dinner. If you’ve been in mama bear mode all day, you might accidently start “mothering” the man in your life — speaking to him like he’s a child or ordering him around like a parent. If you are a married mama bear, be aware that you might need a couple of minutes of adjustment when he first gets home. He probably needs a moment, too. Then you can begin interacting with him like a spouse instead of like a child who needs your help and input on every single decision he makes.

Bottom line: the Papa Bear in your life need encouragement. Everywhere you look, it seems a new attack on masculinity is hitting the news. Whether that be the Gillette commercial ad-splaining how “boys will be boys” really meant “toxic masculinity” or when the American Psychology Association began labeling “traditional masculinity” as harmful.

We cannot throw out masculinity just because the worldly forces want us to. If we did that, we’d be throwing out Jesus, too. Jesus – the God-man – set a perfect example for us, not just in His humanity but also in His masculinity. He’s the hero of the Bible, of the Christian faith, and the central character in the whole narrative of human history. His life is the vertex of history itself – we measure time according to Him: B.C. (before Christ) and A.D. (anno domini – “in the year of our Lord”). In His earthly ministry, Jesus did bold and daring things to prove His love to His future bride (us). He showed incredible strength of character and commitment. He served. He taught. He was kind. He was good with kids. He was mysterious. He disobeyed bad religious traditions. He modeled holiness. He made friends out of strangers, and He estranged religious authorities. He was mysterious and enlightening. He gave a voice to voiceless and silenced bullies. He stared danger in the face and didn’t back down even when faced with torture.

Jesus is profoundly masculine, a heroic manly man for all of us guys to look up to. Every little boy and young man should want to grow up to be somebody’s hero. So, Mama Bears, you can bless the heroic heart of your Papa Bear by letting him know you respect him, that your family needs him, and that you really appreciate him. Sometimes we Papa Bears need to see that it’s not only okay but appreciated when we act like men.

John D. Ferrer is the husband of Hillary Morgan Ferrer. He holds an MDiv. in Apologetics from Southern Evangelical Seminary, and a ThM and PhD in Philosophy of Religion from SWBTS. He is the official bug-squasher at Mama Bear Apologetics headquarters and–after many years of practice–can now differentiate between Hillary’s “I just cut my thumb off while chopping onions” scream and the “there’s a bug straight from my nightmares” scream: not an easy feat.