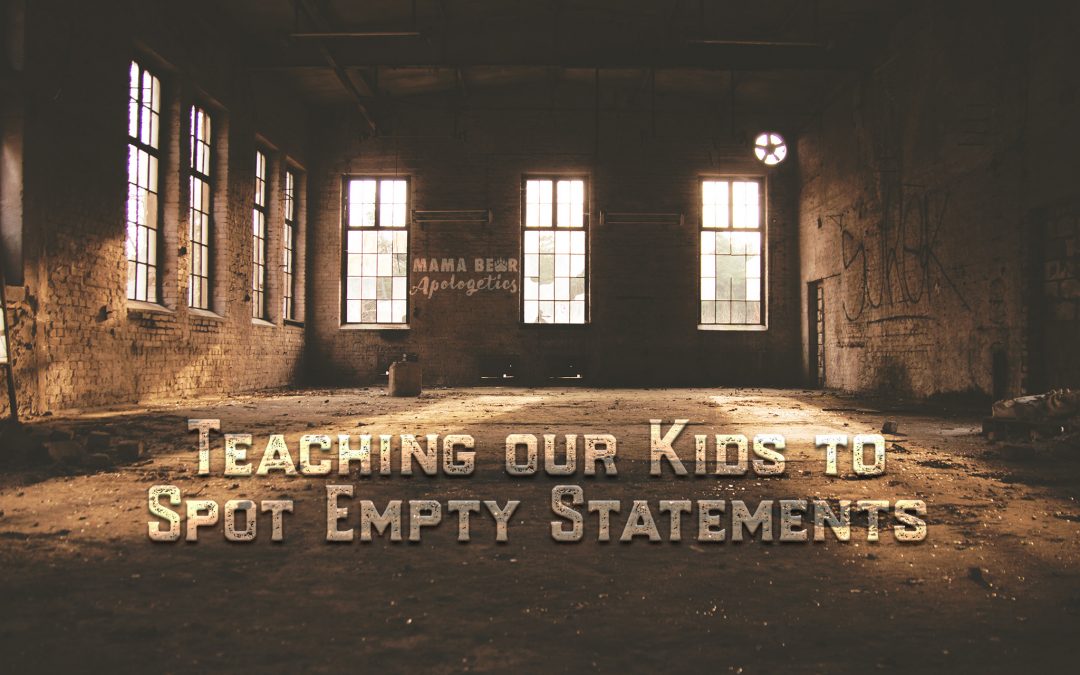 John and I were at the Iowa State Fair this weekend. (My husband loves all the fried food. Calories at the fair don’t count, right?) Among our scheduled stops, we wanted to see a band that advertised itself as a mix between Stomp and Accapella. Sounds cool right?

We sat down with whatever artery-clogging victual we had just purchased and as the band started to sing, John and I realized that they weren’t exactly what we had thought. They weren’t bad necessarily. They just sounded a whole lot like a group that you’d hear brought to a middle school to give some flowery feel-good generic message—which consequently is exactly what they did.

John and I stayed for a song or two, but once we realized that it wasn’t getting any better, we moved on. However, at the behest of my cousin (shout out to Martha!) I decided to share the conversation that John and I had on the way out.

What exactly did they mean by “unity”?

This is one of those linguistically thefted words that our society is obsessed over. (If you’re not sure what linguistic theft is, check out chapter 4 of the Mama Bear Apologetics book.) Linguistic theft is when a word (especially a word with Christian connotations) has been taken, redefined, and then put back on the market to champion something that Scripture never intended. Or sometimes, it’s a word that just sounds really great, but upon digging, has no meaning whatsoever.A word like “unity” only has meaning when coupled with a message of what we are to unify with. Without defining what we are unifying over, it's just empty words, and people can fill in the details with whatever message they want. Click To Tweet

What were we supposed to be unified over?

We actually debated waiting until the concert was over to go and talk to the band and ask them “What exactly is your message of unity regarding?” We expected that they would give some generic version of how we were all humans and needed to stick together. To which we would ask, “What about sex traffickers? Should we be in unity with them?” I’m assuming they would have said no. And of course we’d follow up with, “What about bullies? Should we be united with them?” I’m assuming they’d say no. “So you’re saying there are some people we are supposed to divide ourselves from?” We expected blank faces by that time. But this was the fair. They probably had 12 shows a day and needed a break. This wasn’t the time, so we just quietly left and went to pet a bunch of baby goats. Who are we supposed to be unified with? Sex-traffickers? Bullies? No? So you're saying there ARE people from whom we should divide ourselves... #linguistictheft #emptyphrases Click To Tweet

The problem with unity is that it implies division. In order to unify over one thing, you have to divide from its opposite. But nobody wants to talk about that (unless they are in politics, and then all you hear is how evil the other side is.) Everyone wants everyone else to unify with whatever their message is. They just want unity with themselves. Everyone is welcome on my team (as long as you agree with my team.) Why can’t everyone just agree with me?! Is that too hard?!In order to unify with one thing, you have to divide from its opposite. Teach your kids to ask for clarity early on before they jump on the bandwagon of 'unity.' #linguistictheft #emptyphrases #apologetics Click To Tweet

Unity has to have a conviction that people are unified around. Unity without a unifying message is just a group of people with no convictions whatsoever. In Christianity, we are called to unity. 1 Peter 3:8, Philippians 2:2, 1 Corinthians 1:10, Psalm 133:1, Ephesians 4:3… I could go on. But implicit in the Bible’s message of unity, is the source of our unity—the message of the cross, Christ’s life, death, and resurrection. Loving God with all our hearts, minds, souls, and strengths and loving others as ourselves. We are called to divide from the world and its practices, and unite over shared Lordship and obedience to Christ as defined in the Scriptures. True unity is actually very divisive! It cannot tolerate its opposite. A call for unity without defining the message is basically asking for a whole crowd of people to gather with no convictions whatsoever. #linguistictheft #whatdoyoumeanbyunity? Click To Tweet

Teaching our kids to critically think through unity

So this is the message we need to be instilling in our kids day in and day out. When we see messages calling for unity, ask them “What are they asking us to unify over?” or “What does unity with their message mean that we need to divide over?” When our kids only hear smooth and attractive sounding words and dig no further, there is no telling what kind of movement they might accidentally align themselves with in the future. Teach them that it is important to define words before we pledge our allegiance to something that sounds good. Because remember, Satan masquerades as an angel of light. It is not often that the true agenda is on display for the world. (Just look at our blog regarding the women’s march of 2017. How many people knew that the principles listed were what they were actually marching for?)

As you train your kids to examine a message before they swallow it, you’ll raise kids who are discerning thinkers and less likely to be taken victim to smooth sounding ideologies raised against the knowledge of God.