What Does the “Don’t Say Gay” Bill Actually Say? 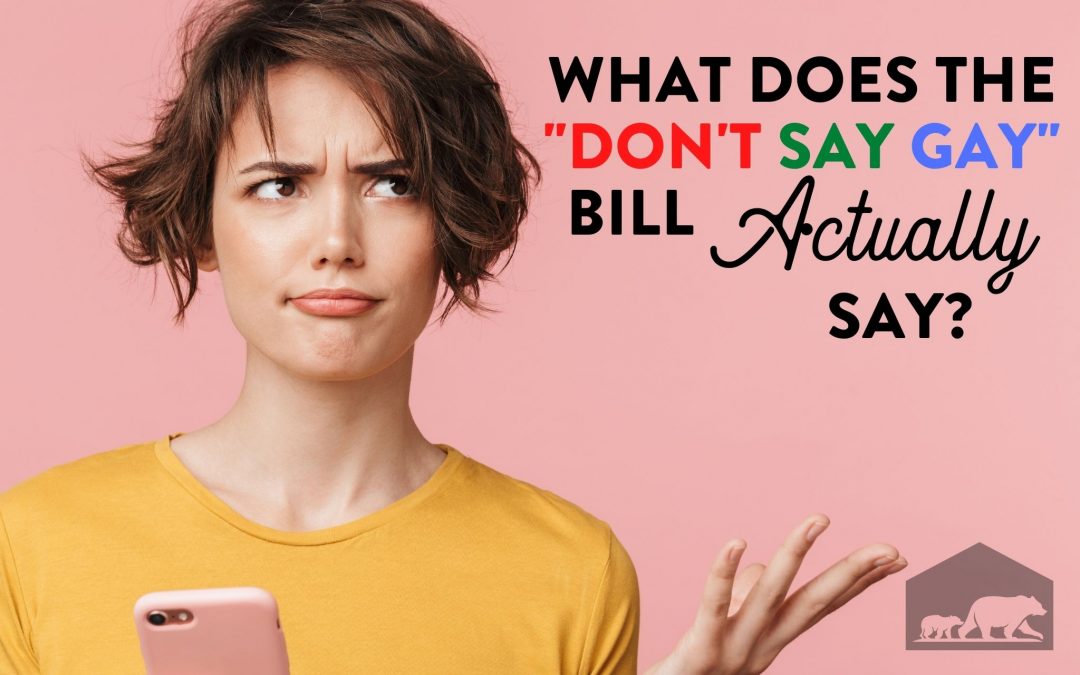 What does the “Don’t Say Gay” Bill really say?

You might have heard of a bill that was recently passed in Florida which has been pejoratively dubbed as the ‘Don’t Say Gay’ bill by LGBTQ+ activists. (The official name is ‘Parental Rights in Education Bill’, or HB 1557.)  As always, we encourage our mama bears to be informed on the actual bill before expressing public support or condemnation. (You can read the full bill here. It’s not super long. It shouldn’t even take 10 minutes.)

Critics are claiming that this bill will ostracize LGBTQ+ kids (or kids with same-sex families) and make them vulnerable to increased bullying and trauma. To be clear, we should be concerned about any kid who is being openly bullied. But is that what this bill will do?

Let’s take a closer look and see what this bill actually says.

1. Sexual orientation or gender identity issues are only explicitly stated once

The whole “Ahhhh! Don’t say gay!” thing is isolated to a single point (lines 97-100) which says “Classroom instruction by school personnel or third parties on sexual orientation or gender identity may not occur in kindergarten through grade 3 or in a manner that is not age-appropriate or developmentally appropriate.” That’s it. That’s all it prohibits. Don’t’ talk about any sexual issues before 4th grade and when you do, make it age appropriate. From those few sentences, activists have labeled this entire bill as the “Don’t say gay” bill.

The main question critics are asking is, “Who decides what is age-appropriate?” Great question! Oddly enough, that’s the exact same question that conservatives have been asking for years when it comes to the sex-ed standards. Nobody on either side of the aisle will define what age-appropriate means (or who gets to decide).1For more on that, see chapter 5 in the Mama Bear Apologetics Guide to Sexuality book.

Media stories that reference this bill use the phrase “parents’ rights” in scare quotes as if that is just the ruse for their real agenda. But this bill is fundamentally about parents’ rights. So why are LGBTQ+ activists all in arms? Well, the parental rights that this bill returns to the parents also undercut the practices that LGBTQ+ activists have been using to introduce their agenda in public schools. But don’t take my word for it. See for yourself.

In Abigail Shrier’s expose article here (and I really recommend you read the whole thing), a California Teachers’ Association conference provided instruction on how to identify and recruit kids for LGBTQ+ clubs without parents’ knowledge or permission. And to give the school plausible deniability, the instructor recommends not keeping any records of student attendance.

Places like the University of Pennsylvania actively encourage educators to introduce questions about pronouns and gender identity to kids as young as kindergarten. The most concerning case is from Madison Wisconsin, where the school district allowed administrators and teachers to change students’ pronouns and names without telling parents and even purposefully withheld the information from parents. According to the Florida bill, practices like these are no longer allowed.

In the new bill, schools cannot adopt “procedures or student support forms that prohibit school district personnel from notifying a parent about specified information or that encourage or have the effect of encouraging a student to withhold from a parent such information.”

3. This bill basically gives parents back the rights they already had

Parents have had the sacred right, duty, privilege, and responsibility of raising their children according to their own family values. As my cousin used to joke when we were growing up, “Every parent has the privilege of screwing up their kid in their own special way.” Historically, the one thing we had all agreed on was that kids’ instruction/programming should be sex-free up until near puberty when kids needed to know What. The. Heck. Was. Going. On. Down. Under.

This is not the case anymore. Within the last 10 years or so, sexuality has morphed into a topic that some educators feel needs to be addressed at every level — kindergarten on up. As we saw above, sexuality is only mentioned once. So why has this whole bill been reduced to the issue of sexuality, and most specifically homosexuality?

I can’t say this emphatically enough: the only reason everyone is equating this bill with sexual issues is that sexuality issues are the main educational arena where parental authority has been pushed aside. The rights this bill returns to parents should not (theoretically) be contentious:

None of these should be controversial. They are only controversial to the LGBTQ+ advocates because this is exactly how they have been slipping in their agenda for the last several years. Florida has watched what is going on in other states and is proactively making a law to prevent their schools from going in the same direction.

Lines 26-28 should be a no-brainer… until you take into account that it prevents schools from administering cross-sex hormones without parental consent, which is a direction that California is already moving toward.

Lines 32-34 should be a no-brainer… until activists realize that this prevents teachers from asking kids questions about their sexual orientation or preferred gender without parental knowledge. As we’ve seen from the California Teachers Association article, this is how teachers can identify which kids to target for LGBTQ+ clubs. It also helps them identify which kids might want to be given counsel or cross-sex hormones without parental consent.

Lines 69-71 should be a no-brainer… until activists are angry that it could prevent schools from providing sexual orientation or transgender affirming counseling without making parents aware that the student is receiving these services.

Remember, the original wording is not contentious. It’s the ramifications on the LGBTQ+ advocacy arm to bypass parental rights that make this bill so contentious. The question all parents should be asking is, “Why do we need a bill that gives parents the rights they already have?” The answer to that question, as we’ll see, is that not everyone agrees that the parents should even have these unique rights.

Consider comments made by MSNBC host Melissa Harris-Perry: “Part of it is we have to break through our kind of private idea that kids belong to their parents or kids belong to their families and recognize that kids belong to whole communities.” Or, as Willis, Texas educator Anthony Lane stated, “I believe that raising a child is the responsibility of the community and that parents should not have the final say,” said Lane. “Let’s be honest, some of you don’t know what is best for your kids.” (These statements were made on the heels of an adult male (transgender female) stripper who was invited to speak to the students — emphasis mine.)

The bottom line: the problem isn’t the bill, but that both sides need to figure out what is actually age-appropriate. That’s where productive dialogue can occur. Everything outside of that is just nitpicking the peripheral details. We need to get to the root of the issue, and Christian parents need to be able to point from Scripture, history, and common sense as to what normal, healthy, sexual development looks like and reassert that parenting their child  is their job — not the state’s job; not the school board’s job. Bills like this are a good step forward to protecting parental rights.

What do we do as Mama Bears?

Mama Bears, I wish we were in another world where we could shelter these ideas from our kids until it was actually age-appropriate. But that ship has sailed. There is no way to shelter our kids from these ideas — which means we have to prepare them. Unless you plan on locking your child in your house with no screens and no internet, they will be exposed to all of these issues — and much younger than you would like. We as parents must be the ones addressing these issues first. It not only protects your kids from making awkward and inappropriate comments when their friend Suzie shows up with two moms, but it also protects the little Suzie from feeling shame for a situation that she has no control over and for which she didn’t ask to be in.

In this way, we can teach God’s design, and also teach our kids to love others. You can do it, Mama Bears! And in case you need a little help, we created a handy-dandy manual in the form of Mama Bear Apologetics Guide to Sexuality. (*shameless plug*) Remember, you were born for such a time as this!