Dear Mrs. Wilson… A Letter from a Middle School Girl to Her Science Teacher 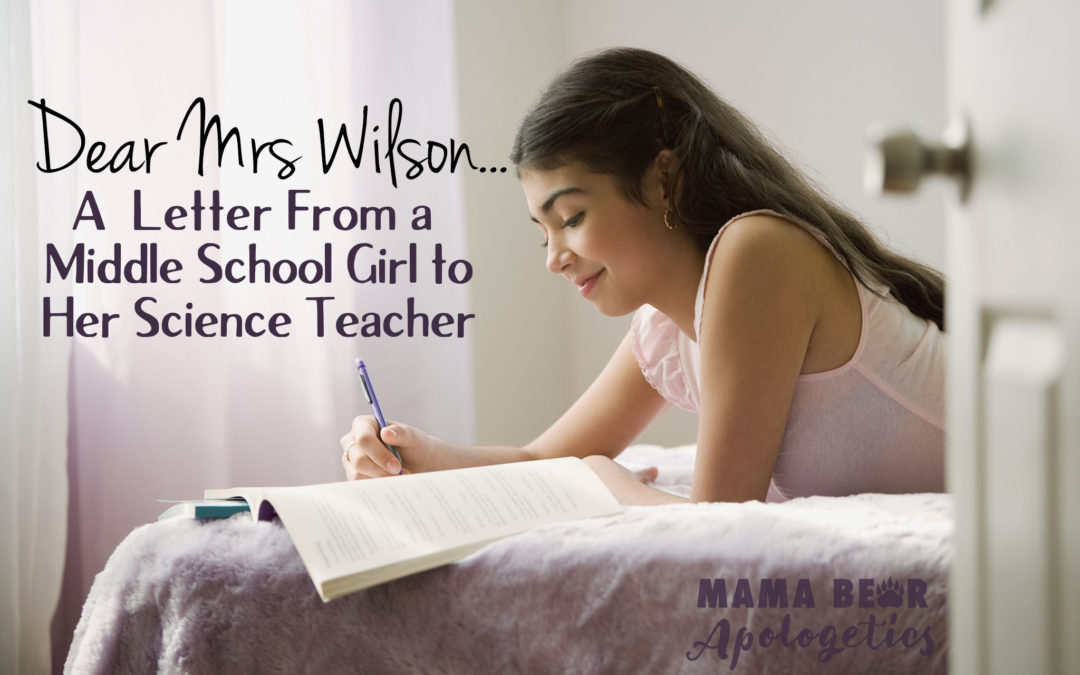 I’ve often said that we don’t give kids nearly enough credit for what they are capable of. As Barna’s research has shown, dumbing down the Christian message into a hollow, shallow, bumper sticker confession of faith is not making Christ’s Gospel “easier to understand” or “more relevant.” It is just making it irrelevant.

As I’ve mentioned before in a previous post, kids can be very black and white thinkers. Encouraging them to stand up for what they believe in often descends into the well-meaning (yet still obnoxious) “you’re going to hell” syndrome. Teaching our kids to place a high value on truth while still being savvy to the psychology of others sounds like an impossible task, but it can be done Mama Bears!

One of my best friends posted on facebook this week about a letter her daughter wrote. We often jokingly (and yet not jokingly) refer to her oldest as “my daughter” because Evie is my mini-me. This was Angielic’s post:

Just learned that my thirteen year old daughter sent a letter to her science teacher questioning her teaching evolution to the class. Apparently, this letter was so well written that her science teacher showed it to several other teachers and they even commended my little up-and-coming defender and theology nerd. I knew nothing of this letter, before tonight. Within an hour of this conversation, I overheard Evie talking about her debate topic that she’s going to present to her class…Abortion. Recently, I noticed several books on abortion and apologetics gone from my library. I’m thinking that I know who took them.

And so it begins!

I couldn’t be more proud of this child if she were my own. I of course immediately asked Angielic to send me Evie’s letter. This is the letter that Evie, an 8th grader, had written:

I’m not sure if you’re allowed to answer this, but I had a little bit of a personal question for you. As I get older, I do understand how science will continue to get more technical– when it comes to topics such as evolution and origin of the universe. When I saw those verses on your desk the other day, combined with some other subtle hints throughout the year, I assumed you were religious and it dawned on me; how might being an intellectual scientist, such as yourself, affect your beliefs, or even vise versa: how do your beliefs interfere with the science you teach? If at all.

I am very well aware that religion and science go hand in hand in some issues, yet completely contradict each other in others; some of the most controversial ones being evolution and universe origin. When I go to my mom’s, we study some heavy theology by some of the most credible Christian philosophers and scholars. I take pleasure in being educated on Christian apologetics, and am really intrigued by the study! Because I will most likely be attending particularly secular schools throughout my life, of course I’ll be consuming the areligious truth science has to offer, yet trying to compare that with my own truth that I’ve chosen to accept. But in reading all this, what is your view point?

If you aren’t allowed or just don’t wish to reply with a response, I do understand, especially since it’s not even really my business. However, if there is even a slight chance that you can, that would be great! Thank you for taking the time to read through my inquiry. It kept popping up in my mind, to the point where I felt strongly enough to email you for the sake of religious-science and my own wandering mind.

Be strong Mama Bears! Be courageous! The enemy wants us to believe that our kids aren’t picking up on what we say. He wants us to believe that our kids aren’t ready for such deep thoughts, that they won’t understand, or that we’ll be embarrassed if we don’t understand. DON’T listen to him! Our kids learn how to engage respectfully by being prepared to engage respectfully. Our kids want something to believe in that is real, and not just stories. When they discover a faith with foundations that reach deeper than all the tough questions, they can be stronger and more gracious than anything we can imagine. Indeed, we could learn from them.