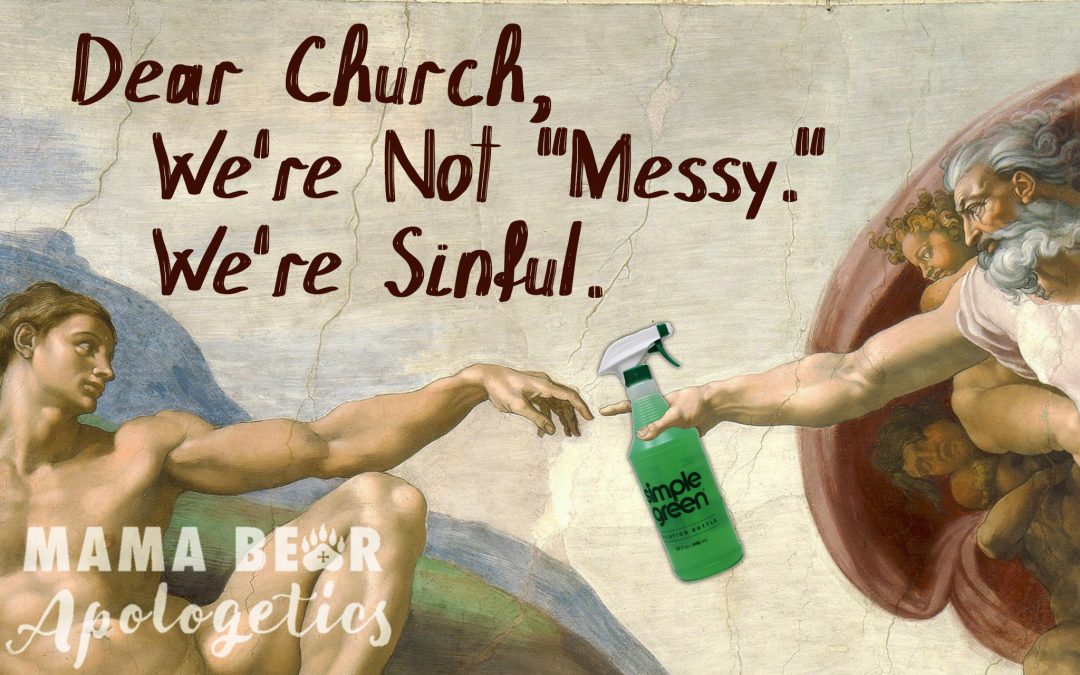 One of the earmarks of progressive Christianity is a refusal to talk about sin. The curriculum I reviewed was no exception. The word that is used in its place is particularly irksome 1) because it is so overused and 2) it paints a pretty awful picture of God. The word? Messy. What's one of the most overused pseudo-Christian buzzwords which turns God into a big germaphobe in the sky? Messy. Click To Tweet

“The woman at the well had a messy past.” “Christian community can be messy.” “Life is messy.” “Embrace your beautiful messy life.” I’m sorry, but no.

The exchange of one word for another is not a new tactic. In fact, we devote an entire chapter to this kind of propaganda in the upcoming Mama Bear Apologetics book. Chapter 4: Linguistic Theft—Changing Words to Get Your Way and Avoid Reality.

Why is culture making this shift? Why has it become so taboo to say the “s” word (sin—oops I said it…) And what kind of ground are we losing by excising this word from our Christian vocabularies?  We’ll get to that. But first, let’s take a look at whether this word is ever warranted.

Is it ever appropriate to use the word messy?

We don’t want to go bashing on this new trend without looking at why this little word has become so fashionable. Often, the trends that irk us most are valuable because they are picking up on aspects of culture or blindspots in the church that we have missed and are attempting to address them, albeit not always in the best way. So when would it be appropriate to use the word “messy” instead of sinful?

1) When it’s in exchange for the word complicated
There are legitimate things in the Christian life that are complicated, and yes, even messy. Relationships between people can be strained from non-sin related issues, like two people who keep miscommunicating. Miscommunication is not sin. Or how about teens struggling to learn boundaries? Or trying to have a sex talk with your 8-year-old who just discovered that the website “snuggle buddies” was not referring to puppies?1Not a real website. I just made that up.  So yes, there are legitimate parts of the Christian walk that can be messy.

3) If a person has a religiously abusive background
There are some people, for whom the word sin carries a bit too much baggage. Maybe they were raised in a hellfire-and-brimstone church and the word sin brings back memories of angry preachers screaming from the pulpit? But messy… they can handle messy. They are willing to talk about that, and maybe along the way start facing issues that they have tried to bury.

I say this knowing full well that probably every person who uses the word messy is going to immediately cling to this point and say “Yes, that’s exactly why I use it!” But before you take a small subset of legitimate cases and rubber stamp them on every situation, continue on below to see why this word really isn’t a great idea and is, at best, a temporary substitution that needs to be replaced and/or defined ASAP.

1) Messy and sin aren’t even in the same ballpark.
As mentioned above, chapter 4 of the Mama Bear Apologetics book is dedicated to a technique I call linguistic theft and the reasons behind why people utlilize it. Two of those reasons are that it turns a negative into a positive (or in this case, downplays a negative) and it obscures the real issue. Are we all tainted by sin? Absolutely. Anyone who’s taken a kid through the terrible twos should be able to describe what unchecked original sin looks like in a child who is too young to control themselves.

Messy is much more palatable. But in the end, it risks whitewashing a major problem so that it sounds like a minor problem. It’s like calling pneumonia “the sniffles.” But times a billion. Some people excuse this verbal hijacking by claiming that it “speaks to the culture where they are at.” Really? You think our culture is that different from ancient cultures? I don’t think so. People didn’t like having their sin pointed out when Jesus was on earth, and they don’t like having it pointed out now. (John 3:19-21) So, while you may be able to “reach the culture” by getting them to acknowledge that they are “messy,” you won’t win them to Christ necessarily.

I’m guessing that the thinking is “If everybody is afflicted, why make people feel bad about it?” Sin sounds so harsh. So final. Messy sounds a lot nicer than sin. Nobody likes a messy person, but nobody would condemn them for eternity for it. Exactly, which brings me to my next three points… Come on, church. This is like calling pneumonia 'the sniffles.' Click To Tweet

2) It turns God into a giant neat-freak, germaphobe in the sky
One of the problems with interchanging the word messy for sin is that sin is the reason we are separated from God. What do you think a kid who hears this will conclude about God? That He prevents people from going to heaven because they are messy? As if God is a giant neat-freak germaphobe who can’t allow someone to mess up His house? What a weak, sniveling picture of God that paints. Now worship Him? No thank you. Worship a God who won't let you into heaven because you track your mess into His house? No thanks. (Just one reason why we need to stop using this word!) Click To Tweet

5) It’s often used as a cover for rebellion
Let’s be honest. People would rather say that their life is messy rather than admit that they really don’t care that much about obedience or submitting to God. But this denial just compounds their “mess”: we can’t fix the problem if we won’t admit the problem, and our problems are often traceable to sin, not messiness. We need to stop trying to downplay the issues here. They’ll just snowball.

So how should we address sin with kids?

Bottom line, we need to be teaching our children about sin, not messiness. They need to know that what we have inside of us is a massive problem. It’s not that God doesn’t allow us into heaven because we’re messy. He can’t allow us into heaven because we  are tainted with something terminally poisonous, and if we come into a perfect place still covered with this poison, then we poison everything around us. God can’t let a sinful person into heaven because it would cease to be heaven. It would turn right back into what we see here on earth. Live on this earth for eternity? No thanks. (In fact, I never understood those movies where people wanted to live forever. They must have a much more comfortable existence that I have.)

On the flip side, we don’t need to turn our innate sinfulness into an exaggerated form of “worm theology” where all we do is beat ourselves up and talk about how horrible we are. (Ohhhh, woe is us… We’re all just lowly worms swimming in our own filth in comparison to God’s glory…) Our children don’t need to hear that they are terminally broken with no hope, because it’s just not true. Yes, we are all tainted with sin, but we are also all created in God’s image and we have infinite worth in His eyes, In our discussions on sin, we can’t let our kids forget that! The human tendency is to emphasize one over the other, but the gospel doesn’t exist without recognizing both our sinfulness and our immense worth. That was the whole point of Christ coming to earth. Jesus didn’t come to prove how much better he was than us—make us all feel bad enough about ourselves that we are tricked into revering Him as Lord. No. He came to say “You have poison? I can get the antidote, but the price is my life. But you all mean so much to me that I freely sacrifice my life so that we can be together forever.” Christ valued us to the point that losing His life was worth the sacrifice. If that’s not worth feeling good about, I don’t know what is.

Want to learn more about talking with your kids about sin? Stay tuned for our next blog by guest blogger Beth Nyhart, author of the soon to be released Rend Your Heart & Not Your Garments: A plea to leaders of a church filled with secret sin.