Congratulations! You’ve defended the Bible. Now what do you do with it? 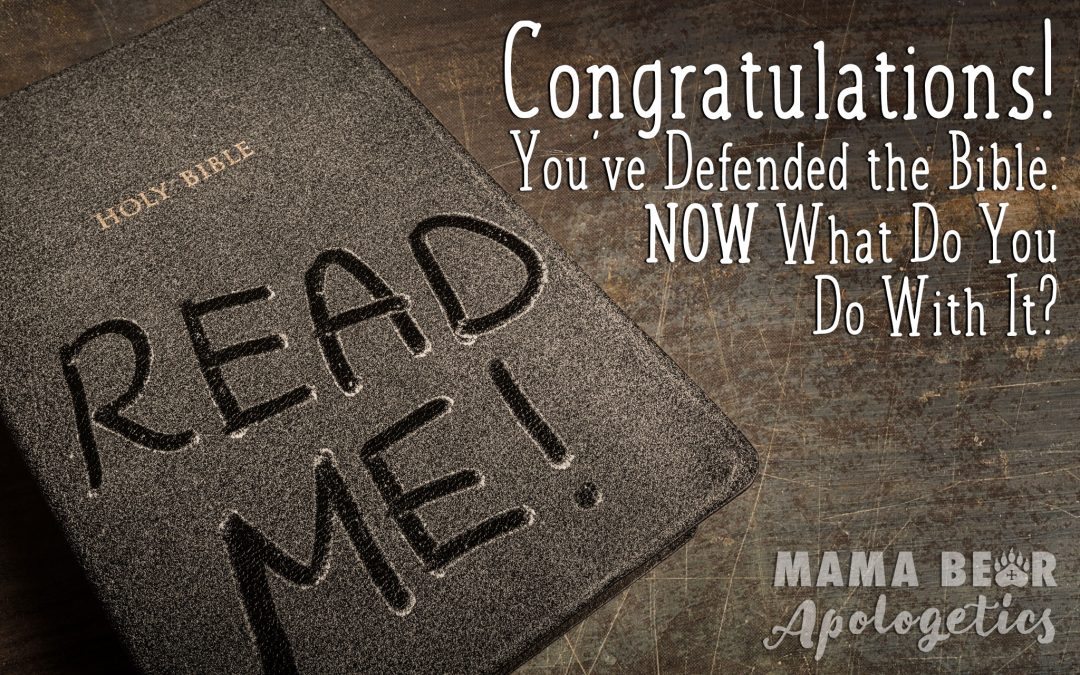 Typically when I go to different venues to speak or teach, I begin by explaining the importance of being able to defend your faith. I illustrate the kinds of questions that we as Christians must be prepared to answer. We are in a time where we can’t just quote scripture; we must understand the logic behind what we believe, and the validity of those beliefs as grounded in truth. I usually give personal examples of the skepticism that I have encountered through my career as an engineer. I quickly realized that before I could tell people how to have reconciliation with God for their sins, they must first understand that there is a God.

That is why it is so important to teach our children why Christianity is true – so they can be prepared for those conversations. But teaching our children apologetics can’t stop with just defending God’s existence, the truth of Scripture, and the deity of Jesus. It must continue with the apologetic defense for a complete Biblical worldview, which includes a Biblical worldview on cultural issues. We can’t tell our children to believe Christianity “because the Bible says so.” Similarly, we can’t we tell them to respond a certain way to social and cultural issues just “because the Bible says so.” Now, don’t mistake what I’m saying here. I am not saying that we are not using the Bible to form our views on social issues (otherwise I wouldn’t have called it a Biblical worldview). What I am saying is that we must actually explain what the Bible says on those issues. For example, we can’t just say “homosexuality is wrong” and leave it at that. We must teach them, through the scripture, why (and where) the Bible says that is wrong. It is the same with any other number of cultural issues, like abortion, gender equality, gender identification, pornography, racism, or even helping the poor.
We can’t just tell our children to believe Christianity “because the Bible says so.” Click To Tweet

Our stances on each of these issues should be formed by what Scripture says about it. But it must be taught in an apologetic manner so that our children can understand why the Bible takes that stance, and therefore, why we take that particular stance as well. Otherwise, we send them out into the world only hearing “that is wrong” or “that is sinful” or “we should be doing this” with no reasonable explanation for it. Then, when they meet the nicest people in the world who approve of the things we said were sinful, and condemn the things that we said were moral, our children won’t understand why they should still hold to the Biblical view. At that point, the scriptural stance on the issues will be pushed aside and replaced by the culturally accepted norms. Their worldview will be peer-driven instead of Bible-driven.

As with anything, understanding the reason behind things strengthens our resolve. So, just like we need to explain to our children why Christianity is true, we must also make the same explanation to them regarding how the Bible addresses these issues. Otherwise they are blindly stumbling around trying to figure out how the Bible relates to anything in their world. Properly defending a Biblical ethic involves honestly studying the Bible to discover what it says about the issues, not just going with Christian platitudes and idioms that most likely aren’t even Biblical. We are not cherry-picking scripture or “reinterpreting” scripture to make it fit our preferences. This is about reading God’s Word in context so that it transforms our thoughts. Our views should change to align with God’s, not the other way around.
We must equip our kids to know WHY we believe, not just THAT we believe. Click To Tweet

With our apologetic defense of the faith, we have a good explanation of the validity of scripture, and confidence in the resurrection. So, if we have all this great evidence and confidence in what we believe, what are we doing with it? How are we using Christianity to transform our thinking and permeate our every thought? 1 Corinthians 10:5 says, “We destroy arguments and every lofty opinion raised against the knowledge of God, and take every thought captive to obey Christ.” That isn’t just for arguments and lofty opinions against the existence of God, but arguments and lofty opinions that are disobedient to God. If we have fought the hard battle to support the validity of the Bible as being the Word of God, then every opinion and every idea we have should be based on the Scripture we have so vehemently defended! Otherwise, what is the point of defending its authenticity? If you have placed the hope of your eternal destiny in God, shouldn’t you then use His Word to guide your entire life? The Bible should be what directs us in how we treat each other, how we talk, how we think about media, how we think about culture, even how we vote. Our entire minds, our every thought, should be taken captive to obey Christ.

Are we really doing that? Are we using the Bible, God’s holy word, to truly transform our minds? Or are we being conformed to this world? Are you basing what is good and right on what God says…or are you allowing culture to dictate how you think? Consider this quote by Charles Spurgeon, who lived in the 1800s: “I believe the one reason why the church of God at this present moment has so little influence over the world is because the world has so much influence over the church.” Even in the 1800s, Spurgeon realized that the world had too much influence over the church. Can you just imagine what he would say about the state of the church now?? If the church expects to have an influence over the world, it must be different from the world. We can’t influence something if we are just like it. So how are we to be different? We are to use this faith that we can logically defend to inform our every thought and idea. We are to truly have a Biblical worldview – and understand how the Bible informs that worldview.
Do our actions reflect Biblical truths, or cultural norms? Click To Tweet

Cathryn is the mother of two rambunctious boys. She is a former NASA engineer, and the author of “Teaching Others to Defend Christianity.” In her spare time, she likes to compete to see who knows the most digits of Pi. You can see more writing by Cathryn at www.www.defendthefaithministry.com