The (Naked) Communist Agenda Presented at the 1963 Congressional Hearing 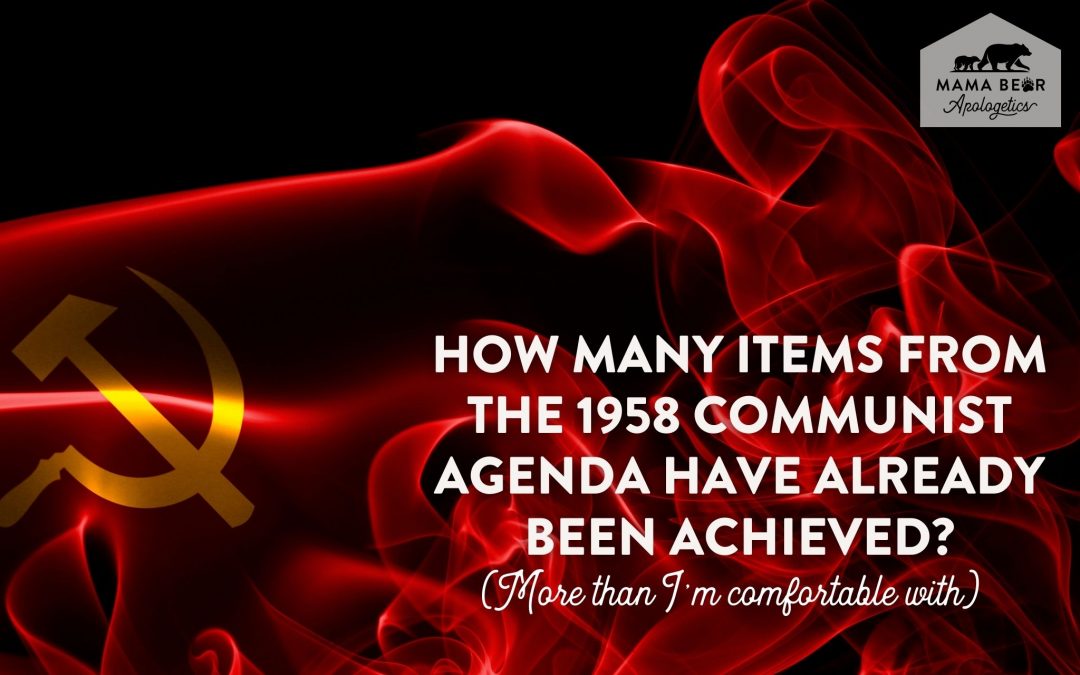 Okay, so this blog has been a long time coming. When writing the Marxism chapter in the Mama Bear Apologetics book, I promised to publish the list of communist goals, and I failed to do so. But I just received another email reminding me of my promise, so better late than never.

I was originally introduced to this list by Carol Swain, a former Vanderbilt University professor, who spoke at the Ratio Christi Symposium. At each of the tables, she provided a list of the communist agenda as recorded by W. Cleon Skousen in 1958.

1958, people!! If this list isn’t prophetic, I don’t know what is. I remember my mouth hanging open as I read through each of the items. The list she had given us was a printout from the 1958 book called The Naked Communist — a book which later informed much of my Marxism chapter. I had always assumed that Marxism/communism was just a political theory. I had no idea how deep the roots went when it came to morality. In fact, you can see in an interview with former KGB operative Yuri Bezmenov, demoralization (i.e., eroding Judeo-Christian morals) is step 1 for Marxism. Why? Because once a society is demoralized, “Exposure to true information does not matter anymore. A person who is demoralized is unable to assess true information. The facts tell nothing to him.” Sounds a whole lot like Romans 1:18-32. With demoralization, our minds become futile.

While the list from The Naked Communist starts out all political sounding, about halfway down, we start getting to the meat and potatoes of what exactly the moral aims are according to communism. Remember the quote attributed to Adolf Hitler, “How fortunate for leaders that men do not think.” So, if you want to govern a people who will not give you pushback, you start by eroding traditional morality. Paul warned us about it, and contemporary leaders are hoping that we don’t read Romans too literally. If we did, maybe we wouldn’t be rolling over so easily as a nation.

What is the Naked Communist?

The book The Naked Communist was written by FBI special agent W. Cleon Skousen. In it, he distilled decades of research that described the rise of communist powers and presented the current communist agenda. His list of 45 goals has become legendary, to the point of being officially read and recorded in the 1963 Congressional Hearing.

Now, we at Mama Bear like to mostly stay out of politics. Our commander-in-chief is Jesus Christ, and out of submission to Him, we submit to whoever is in government authority. But Marxism (communism) is not just political. As we described in the Mama Bear Apologetics book, it is deeply ideological, and in many ways religious, in its attempt to explain the world in secular terms. I promised in the book that I would include the communist agenda as recorded at the 1963 Congressional record. So here it is. I’ve bolded the ones that were of particular concern to me — namely items 24-42.

[From The Naked Communist, by W. Cleon Skousen]

1. U.S. acceptance of coexistence as the only alternative to atomic war.

2. U.S. willingness to capitulate in preference to engaging in atomic war.

3. Develop the illusion that total disarmament [by] the United States would be a demonstration of moral strength.

4. Permit free trade between all nations regardless of Communist affiliation and regardless of whether or not items could be used for war.

5. Extension of long-term loans to Russia and Soviet satellites.

6. Provide American aid to all nations regardless of Communist domination.

8. Set up East and West Germany as separate states in spite of Khrushchev’s promise in 1955 to settle the German question by free elections under supervision of the U.N.

9. Prolong the conferences to ban atomic tests because the United States has agreed to suspend tests as long as negotiations are in progress.

10. Allow all Soviet satellites individual representation in the U.N.

11. Promote the U.N. as the only hope for mankind. If its charter is rewritten, demand that it be set up as a one-world government with its own independent armed forces. (Some Communist leaders believe the world can be taken over as easily by the U.N. as by Moscow. Sometimes these two centers compete with each other as they are now doing in the Congo.)

12. Resist any attempt to outlaw the Communist Party.

13. Do away with all loyalty oaths.

15. Capture one or both of the political parties in the United States.

16. Use technical decisions of the courts to weaken basic American institutions by claiming their activities violate civil rights.  Using the phrase 'civil rights' to basically shoehorn any agenda through? Predicted in 1958. #nakedcommunist #marxism #demoralization Click To Tweet

17. Get control of the schools. Use them as transmission belts for socialism and current Communist propaganda. Soften the curriculum. Get control of teachers’ associations. Put the party line in textbooks. [I can verify that this happens in higher education, and when you read the rest of the list, you’ll see it’s prevalent in elementary/middle/high school sex-ed and history classes, as well.]

18. Gain control of all student newspapers.

19. Use student riots to foment public protests against programs or organizations which are under Communist attack.

22. Continue discrediting American culture by degrading all forms of artistic expression. An American Communist cell was told to “eliminate all good sculpture from parks and buildings, substitute shapeless, awkward and meaningless forms.”

25. Break down cultural standards of morality by promoting pornography and obscenity in books, magazines, motion pictures, radio, and TV.

27. Infiltrate the churches and replace revealed religion with “social” religion. Discredit the Bible and emphasize the need for intellectual maturity, which does not need a “religious crutch” [i.e., this basically predicted the rise of “social justice”].

28. Eliminate prayer or any phase of religious expression in the schools on the ground that it violates the principle of “separation of church and state.”  Take away prayer in schools? It happened like four years later. #nakedcommunist #marxism #demoralization Click To Tweet

29. Discredit the American Constitution by calling it inadequate, old-fashioned, out of step with modern needs, a hindrance to cooperation between nations on a worldwide basis.

30. Discredit the American Founding Fathers. Present them as selfish aristocrats who had no concern for the “common man.”

31. Belittle all forms of American culture and discourage the teaching of American history on the ground that it was only a minor part of the “big picture.” Give more emphasis to Russian history since the Communists took over.

32. Support any socialist movement to give centralized control over any part of the culture–education, social agencies, welfare programs, mental health clinics, etc.

33. Eliminate all laws or procedures which interfere with the operation of the Communist apparatus.

35. Discredit and eventually dismantle the FBI.

38. Transfer some of the powers of arrest from the police to social agencies. Treat all behavioral problems as psychiatric disorders which no one but psychiatrists can understand [or treat].

39. Dominate the psychiatric profession and use mental health laws as a means of gaining coercive control over those who oppose Communist goals.

40. Discredit the family as an institution. Encourage promiscuity and easy divorce.  [Remember all the huballoo from BLM who had on their website to ‘disrupt the western prescribed nuclear family’? Yup. Marxist agenda. They have since removed it after everyone called them out on it.] 'Disrupting the Western prescribed nuclear family' and pushing for no-fault divorce? Predicted in 1958. #nakedcommunist #marxism #demoralization Click To Tweet

42. Create the impression that violence and insurrection are legitimate aspects of the American tradition; that students and special-interest groups should rise up and use [“]united force[“] to solve economic, political, or social problems. [All the protests that you’ve noticed in 2020 and before…]

43. Overthrow all colonial governments before native populations are ready for self-government.