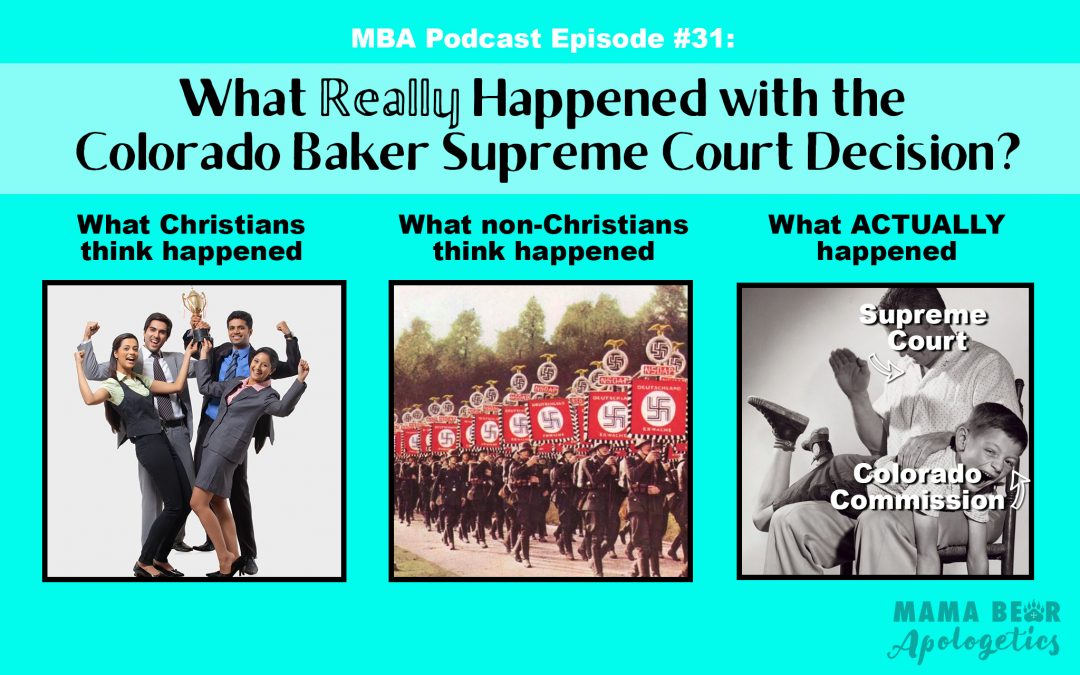 Social Media was abuzz with the recent Supreme Court Decision overturning the Colorado Civil Rights Commission decision. In 2012, a baker, Jack Phillips, declined to make a wedding cake for a same-sex couple. He stated that he would make them any other cake they wanted, just not a wedding cake. His religious convictions prevented him from participating in a ceremony that he did not agree with. The Commission referred the case to a state Administrative Law Judge, who ruled in favor of the couple. However, Phillips did not agree with the way the case was handled, and apparently neither did the supreme court. Was this a 'win' for religious liberty? Bigots? Both? Neither? What was this case really about? Click To Tweet

So why should Mama Bears care about this?

This is politics, not apologetics. Why are we even discussing this? Summer just started. You’re just trying to keep your children from burning the house down while you take a shower.

This is important to apologetics for one major reason: political scenes like this are becoming the norm, and expressing any support whatsoever for the baker could earn your child the label of “hater” in certain circles. This can be very confusing for them when we are trying to instill in them a love for God and love for others.

What happens when it feels like they have to choose between what the world calls “loving,” and affirming traditional Christian morals? This is such an issue, that Rebekah and I are going to devote a few podcasts to it. This is the first, and it is bringing you all up to speed as to what the decision actually said, and how people are perceiving it. Podcasts to come will deal with issues like “How do we teach our kids to ‘judge rightly?'” (because we are commanded to in John 7:24) and “Teaching our kids to love those who call them haters.”

Download the podcast on iTunes or listen directly from the media player above!

People and resources mentioned in the Podcast

Have your children been asking about this decision? What are some struggles that you have when discussing topics like this with them? Tell us about it in the comments!