Lesson of the Week: The “Battle of Ideas” is NOT a Metaphor 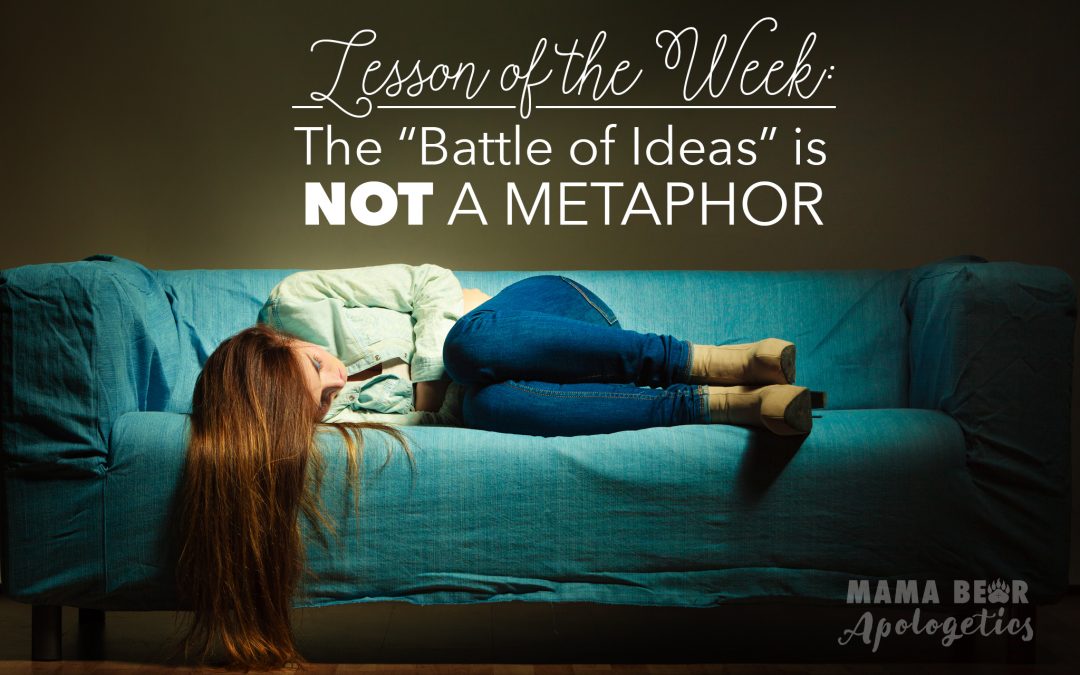 Many people hear about the “battlefield of ideas” or “the battle for the mind” and think that we are speaking metaphorically. While yes, there are some senses in which it can be used metaphorically (i.e. we are not referring to physical armor and literal swords), I was reminded this week that the concept itself is NOT a metaphor. It is reality. Like super-real reality.

For everyone who follows Mama Bear on Facebook, you might remember the article I linked to this week. For those who don’t, I’ll catch you up to speed. (But first, why are you not following us on Facebook!?!?) The article was titled “The Trouble with Easter: How To (and not to) Talk to Kids About Easter.” (See original article here.) Here was the accompanying prologue I wrote to introduce this article:

“Mama Bears, get ready to growl: THIS is an example of what we are training for. According to this article, it can be psychologically damaging to preach the Gospel to children. We should not teach kids that Jesus came to save them from their sins because AND I QUOTE… “This suggests that these children exist in a way that is displeasing or unsatisfactory to God, which further suggests that God is a Being sitting on some shiny throne literally evaluating every individual life from afar, casting judgment and glaring in disdain. There is nothing inherent to these children’s humanity from which they need to be saved. Therefore, an atonement theology of inborn corruption in need of redemption has no place in a conversation with kids about Easter.” WHAT?!?!?! There is nothing about this article that is true to the historic Christian faith, or which lines up with what scripture teaches. In fact, this author claims that the reality of the resurrection is a secondary issue, and we shouldn’t spend our time arguing about whether it really happened or not. The Apostle Paul would beg to differ when he said that if Christ had not been raised, our preaching is in vain, we are dead in our sins, and we are to be pitied as fools. (1 Corinthians 15:14) Ladies, there are times for unity, and there are times to break fellowship. If you hear any of the ideas like this in your church, it is time to either speak up, or break fellowship. Keep in mind, this article was written by a CHILDREN’S PASTOR!! I might have to write a blog response to this…”

Rebekah and I decided to do a podcast instead of a blog. Aaaaaand, let me tell you how that went. I thought I had all my ducks in a row, with literally 13 pages of printed notes, full of verses organized by topic, in chronological order for the article. The plan was to read the article, and compare the content with what scripture said. (As always, our goal is NEVER to demolish people, rather to demolish ideas. And these ideas are worthy of demolishing.) What happened was basically a fog, complete with me bumbling through in confusion for most of the podcast, Rebekah and I talking over each other like we didn’t even hear each other, and a deeeeep depression upon completion. My literal thoughts as we finished were “What in the WORLD just happened?!?!?!”As we finished recording the podcast, I wondered 'What in the WORLD just happened?!?!?!' Click To Tweet

No REALLY, what in the world just happened?!

It was at that moment that I realized “We didn’t pray before we started. Why didn’t we pray?” I’d had every intention of praying beforehand, but it’s like my mind was mush. I messaged my friend who had brought this article to my attention. This article was written by the children’s pastor of the church she used to attend. I remember her telling me how she used to attend Bible studies at this church, and it was like a fog would descend on her the second she stepped through the door, and would lift when she left. I described my experience to her and her response was “Yeah, that sounds familiar. Ugh…. so sorry.”

I felt like a total drama queen as I tried to make food and literally layed down on the dirty kitchen floor, staring off into space, trying to make sense of what I was feeling. It’s like my soul was covered in ooze. It was at that moment that I was reminded that the ideas Rebekah and I were trying to combat were not just bad ideas. They were demonic ideas. I would like to say that this was a new realization, but the God’s honest truth was that I was fully convinced of this fact before we started the podcast. But somehow, even though I knew it, I didn’t treat it the way I needed to treat it: by armoring up for a spiritual battle. I did not do my due diligence before we began, and as I lay on the floor afterwards, I regretted it.That moment when you remember that you forgot to put on your spiritual armor... Click To Tweet

Waking up today, I’ve been in a bit of a funk still. And even though I knew that what had happened last night was part of a spiritual battle, I still convinced myself that maybe I was just experiencing a normal funk. I can be emotional. I admit it. I struggle. But then the messages from our awesome editor Jerimiah started coming in… This guy is not like me. He’s a big, tough, military guy (Army division) who just happens to have adopted Mama Bear as his ministry to serve. We couldn’t do Mama Bear without him! (Thank you Jesus for our supportive Papa Bears!) He’ll readily admit that he’s much more familiar with actual warfare than he is spiritual warfare (although since working with us, that’s starting to change. You’re welcome J.) Anyways, here is the message I woke up to from him: “When I first started editing this podcast, I had a pervasive heavy feeling that was a bit odd to me. But I think, it may be how disturbing the article you are addressing is. It makes me understand why Arian got punched out at the Council of Nicea. There is something going on here though that I can’t describe. It does indeed feel spiritual. . . It’s heavy and intense.”

Through a few conversations throughout the day, he’d send stuff like “Yeah….I had to pray to get through editing this one. That doesn’t happen normally…” and “How strange that your editor gets attacked to where he doesn’t even want to finish editing? However after prayer….elation and confidence.” (Thank you Jerimiah for affirming that I am not crazy, and that there really was something weird going on with this podcast.)

So what DO we do about this?

Mama Bears, we need to be clear about this: Hebrews 4:12 says that the word of God is living and active. But we need to remember that according to 1 Peter 5:8, our enemy is prowling around like a roaring lion seeking whom he can devour. I knew that the words of this article were demonic, but I forgot that there is a different kind of living and active word at play here. Like a fool, I underestimated my opponent. The battle of ideas is not, I repeat NOT, a metaphor. Anyone who comes preaching a supposed “Gospel” which discourages teaching that Jesus died for our sins, discourages the idea that it was planned, and discourages teaching that we are inherently sinful – is not teaching the Gospel. A person is rejecting Biblical doctrine if they teach that there is no literal hell, that God doesn’t judge, that resurrection is not real, that Christ’s resurrection is a myth, that it doesn’t matter if the Easter story is just a fable, and that this life is all we have. This sort of teaching is the doctrine of demons we are warned about in 1 Timothy 4.

Now, I’m not one of those people who sees a demon lurking behind every bush, but the teachings in this article are demonic. From beginning to end, it is the enemy’s whisper saying “Did God really say. . . “ Like a fool, I treated them as mere words, mere ideas to be discussed. They are not. The strongholds present in this article are much bigger, more sinister than I anticipated, and they fought back with more gusto than I was prepared for.

So because of that Mama Bears, we will not have this podcast posted as quickly as I’d planned. (I wanted to get it out while Easter was still fresh on the mind.) While our editor did get through the editing process, we are having a few trusted Mama Bear accomplices previewing it to see if we need to re-record. I can assure you that if we do, the NEXT time will be with the full armor.

Some take away points…

And before I leave you with just a general feeling of yuck, let’s put some instruction to this story, so that you are able to recognize similar situations. What does the spiritual battle look like when it comes to the battle of ideas? This list can basically be read like a Jeff Foxworthy “you might be a redneck if” skit. We’ll call this the “You might be in a spiritual battle of ideas if…” list. Here are some things to look for – both in yourself, and if your kids come home from school, college, or (unfortunately) church with some wacky ideas:

1) Confusion – If things seem really clear at some points, and then later like absolutely nothing makes sense. . .

2) Hopelessness and Depression – If you are left with a feeling of hopelessness and depression that you can’t really explain, and you don’t know where it’s coming from. . .

3) Irrationality – If the arguments don’t seem to make sense, and contradict each other all over the place, and are full of “feeling” language in the place of logical thought. . .

4) Radical Heresy – If you are dealing with ideas that attack the primary, foundational, fundamental doctrines of the Christian faith – that Jesus lived, died, and physically rose again to save you from your sins. . .

Know how to recognize the symptoms, Mama Bears. Remember: we can have every tool at our disposal to demolish empty philosophies that depend on the teachings of man rather than the revealed word of God. However, when you find yourself in a spiritual battle of ideas, be sure and suit-up, pray-up, and stand firm. Most importantly, don’t forget: All the apologetics in the world is useless without the power of the Holy Spirit.

So after an amazing editing job by our editor Jerimiah, and feedback from about 7 supportive Mama and Papa bears, we decided that we did NOT have to re-record the podcast! You can access it here. I may have bumbled through like a fool during recording, but if there’s one thing I learned how to do back when I edited the podcast myself, it’s how to mess up in such a way that my mess ups are easy to edit out. (You’re welcome Jerimiah. haha!) Consequently, the day after I posted the podcast, our entire website went down for a few hours. Go figure, eh? #NotSurprised