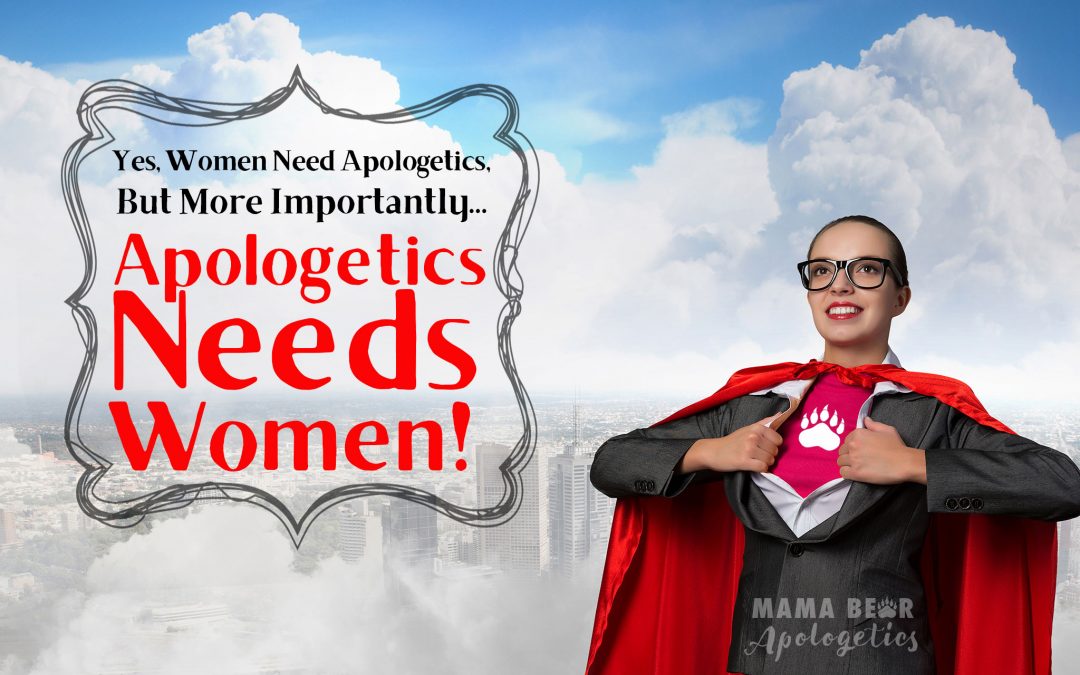 1 Peter 3:15 says that we are to give a ready defense for anyone who asks for the hope that is within. 2 Corinthians 10:5 says that we are to “demolish arguments that set themselves up against the knowledge of God.” Now with words like “defense” and “demolish,” it is not surprising that the field of apologetics has been dominated by men in recent years.

Apologetics is important for all Christians, including women, but that’s actually not what we’re here to talk about today. Whenever you hear people talk about “women in apologetics,” they are usually focusing on why we need to reach women with apologetics. And it’s true, we do! The mandate to love the Lord our God with all our hearts, souls, MINDS and strengths is a universal command. So yes, I get it. Apologetics for women is vital. However, there is a lesser talked about issue, and that is the one we will discuss today: why apologetics needs women!

For the record, whenever we include gender in a conversation, there are people who are ready to stand up and declare their non-conformity to gender norms. When I talk about the different qualities of men and women, I am of course speaking in generalities. I acknowledge that there are men and women who defy their gender stereotypes. I’m actually one of those women. Let’s all embark on this conversation acknowledging that generalities are not absolutes. We are looking at trends, and every trend has an outlier. That’s my official disclaimer before we dive into why apologetics needs women.

It has long been recognized that women have a… shall we say, civilizing influence on men. Jokes are made at bachelor parties about the “end of wild times,” and the bachelor-pad transforms from a purely functional assortment of free and hand-me-down furniture to a home full of lovely smells, pictures on the wall, and too many pillows for a man to understand.

I have noticed many online conversations between skeptic and believer that have been less than civil. While truth itself must be fortified without compromise, the manner in which we express these truths requires sensitivity to the individual with whom we are speaking. For some of our amazing, warrior, pioneering men, this quickly becomes a bull in a china shop scenario. Difficult truths must be applied gently, with compassion, and with mercy—all qualities for which women are better known.

2) Women often have a higher EQ

Speaking of gentleness and compassion. . . There is a reason why females dominate the caretaking industry. Our ability to recognize facial expressions and social cues is much higher than men’s.[1],[2] A phenomenon that I have seen emerge within the last 10 years (and especially the last 5 years) is the number of people who are in a perpetual state of fight-or-flight. We may balk at the idea of “trigger warnings” and “safe spaces,” but put the pieces together friends. There has been a fundamental change in our society’s ability to handle conflict and we can’t ignore it or wish it away. We are not out to win arguments; we are out to win people. When a person enters fight-or-flight, you have already lost ground.

A common complaint I’ve heard from churches is that apologetics isn’t practical. When they say “practical,” what they usually mean is “I don’t see how this will promote new converts to Christianity or put more people in the pews.” Personally, I think the practicality issue could be addressed by adding more female voices to the mix. Women may not necessarily have something new or different to say about apologetics. However, they often approach it differently.

I have rarely heard a woman speak on apologetics topics without including how the topic has affected her personal relationship with God, or how she uses it to relate to others around her. Most people don’t instinctively know how to incorporate apologetics into their everyday lives. They go to conferences, and are filled with knowledge, and go home and have no idea how to implement what they have learned. I’m not saying that women alone hold the key to application. However, I will make the case that it often comes more naturally for us. Thus, we could play a vital role in making apologetics more accessible to the common lay-person, and more attractive to the average pastor.

4) Apologetics already has a bad reputation, and a feminine face could help

I cannot count the number of times my husband and I have told someone that we did apologetics, and the person reacted with warnings of, “You can’t argue people into the kingdom of heaven!” Friends, if I could reach out through your screen and shake you right now, I would. Listen up. This is important. If this many people think that apologetics is only about arguing, then we have not been doing it correctly.

I understand why men have retreated to apologetics. In many ways, the church has become very feminine, forcing men to hold hands and sing under candlelight.[4] I can fully understand why they would be drawn to apologetics. Rebekah and I joke about how some guys see it as a Christian Fight Club of sorts. #KiddingNotKidding

I get it. Men need a place in the church where they can be men. And contrary to what some guys might think, my push for women in apologetics is not about finding the last bastion of men, and invading it, too. However, we cannot ignore the missing gender dynamic that is at play.  There is another phenomenon that I have observed, both in the workplace, and as a teacher. When it comes to leadership, men and women can do and say the exact same thing; the man will be seen as a strong leader, and the woman will be viewed as a [word I don’t say in polite company.] However, this exact same phenomenon is true on the flip side; there are a lot of harsh truths that people will more readily hear from a woman than they will a man. Why is that? Is it because we are less intimidating? Is it because we intuitively know how to soften the blow? Is it because I’m 5’2” and it’s hard for someone to really take me seriously? Who knows. All I know is that if a man and a woman both say something harsh with love, the love is often more readily perceived coming from a woman than it is from a man.

5) Women are more relational in their ministry

Apologist MaryJo Sharp has pointed out an interesting observation from talking with people at apologetics conferences. Men and women often have different reasons for getting into apologetics. While men are usually trying to answer their own questions, women are often trying to answer the questions of someone they love – a child, spouse, or friend. When it comes to the ministry aspect of apologetics, women seem to be more missional, but they do it in a relational way.

Calling our society “gender confused” right now is a massive understatement. Men don’t know how to be men, and thus women don’t know how to be women. It has a cyclical effect. Some women read the verse about having a “gentle, quiet spirit” and think that it means that they have to be a doormat, never speaking up, or never voicing their disagreements. If that’s how God viewed authority, then He would not want our prayers. He would tell us to just shut up and do what we’re told. But that is not how Scripture portrays God. Yes, we submit to His will, but we don’t remove ourselves from the conversation.

On the opposite end of the spectrum, we have the proponents of modern feminism who think that they can elevate the status of women by attacking the value of men. (Like a fish needs a bicycle, right? Ugh.) They react against the doormat stereotype of women and fight back by emasculating every man in their lives in the name of gender equality. To use the cruder slang, we’ve got the ball-buster women. Let me be clear: “strength” gained by tearing someone else down is not strength. True femininity is neither extreme; it is a fierce strength wrapped in gentleness. As I mentioned in my blog on Wonder Woman, I believe that when women know how to be women, the men become better versions of men. Everybody wins. It is not a zero-sum game. As we women step into apologetics, we have the opportunity to model what truth wrapped in love looks like to a world that has forgotten what Biblical femininity should look like.  Positive versions of femininity must be displayed if for no other reason than negative versions of femininity must be refuted. Click To Tweet

Yes! Women need apologetics. Moms, studies show that you get more questions every day than doctors, nurses, or the British Prime Minister during an interview![5] So who do you think is getting the spiritual questions? You are! Apologetics is not a hobby; it is a need. However, this need is not a one-way street. Apologetics needs women just as badly!

Check out the Women in Apologetics website for more information about their next conference. The LiveStream from the 2020 conference is still available here. You can see what they did in 2019 in the video below.

[4] Read the book Why Men Hate Going to Church by David Murrow. It is a real eye-opener, and he has nailed his assessment (in my opinion.)