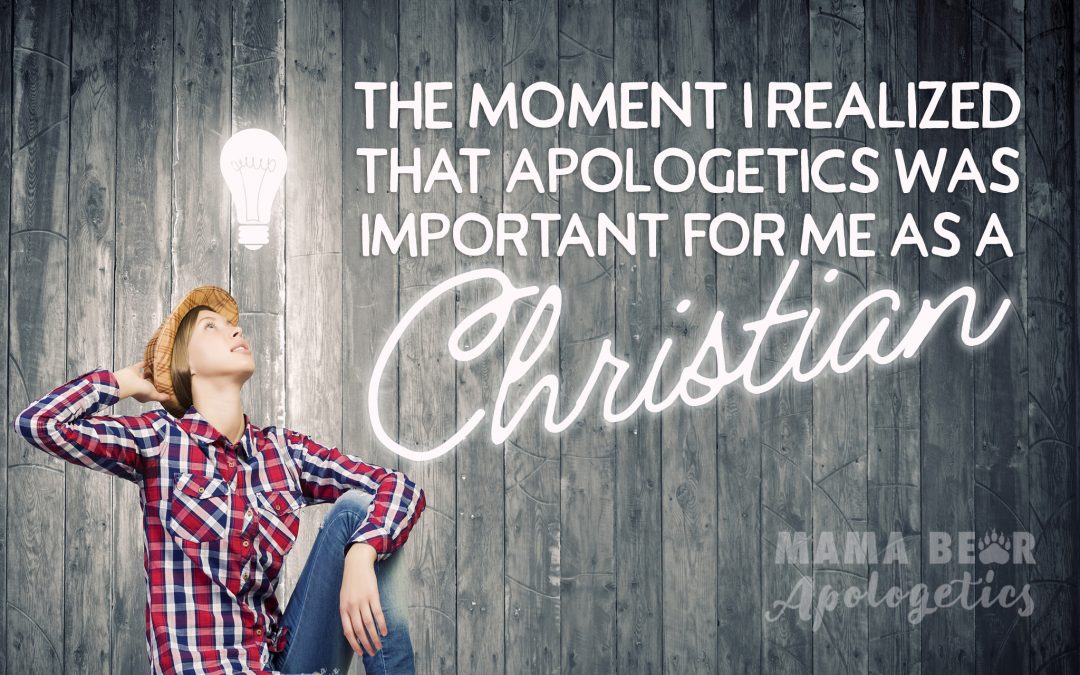 My husband, Jay, and I originally came to Seminary so that Jay could earn his Master’s of Divinity in Apologetics and a Master’s of Theology in New Testament. Because I already had a couple of advanced degrees, getting another degree wasn’t really on the top of my to-do list. Plus, we had two young daughters at the time and were in the process of adopting a third. But, did you know that spouses get a 50% tuition discount at Denver Seminary? It’s really tough for someone who loves education as much as I do to turn an offer like that down. (What can I say? I’m a sucker for a good bargain, especially when it comes to school!)

The reason I opted for apologetics and ethics as my major was my husband. You see, Jay became a Christian because of apologetics, and I have to admit that at times, he lost me in conversations. He’d say things like kalam cosmological argument or teleological, and my eyes would gloss over. For me, even the word apologetics was a tough one to grasp at first. So, my first reason for studying apologetics was “At least I can understand what Jay is talking about and converse with him!”

My journey from blind faith to apologist

I became a Christian at a very young age, and my faith was blind; I believed because I believed. It was something I “felt in my heart,” and that was enough for me… for a while. My first apologetics class was tough, and Douglas Groothuis’ book, Christian Apologetics, was intimidating (in part because he was teaching the class!). My motivation was still just to learn the material so that I could understand Jay when he talked with me about apologetics.

But then, we had to complete an assignment where we talked to an unbeliever. We just had to ask them questions about what they believed and then write about our experience. This is the moment it all came together for me.

I interviewed a friend of mine who is an atheist through and through. She was willing to talk with me at length about what she believed (or didn’t believe). As with many atheists, her views work for her, and she doesn’t see a need for anything to change in her own life. I was able to spot the inconsistencies in what she was saying, but I couldn’t respond with anything but my own opinion about what has worked for me with Christianity. It was in that moment that I caught on to the problem of my faith. Even if I had wanted to, I didn’t know how to respond to her thoughts about Christianity. I realized I couldn't respond to an atheist's thoughts about Christianity even if I wanted to. #apologetics Click To Tweet

I couldn’t tell her why she could believe the resurrection was a true historical event.

I couldn’t help her with the concerns she had about evil in the world.

I couldn’t even give a good answer about the purpose of humanity.

That day, I cried and prayed.

I realized that what I had been doing for the past thirty years in my walk wasn’t the faith described in Hebrews 11. How could I really be “sure” or “certain” when I couldn’t even articulate to someone why I thought Christianity was true?! How could I have a Hebrews 11 faith when I couldn't even articulate why I thought Christianity was true?! #apologetics Click To Tweet

I needed to have an answer.

I needed to be prepared to give a defense for the hope within me whenever someone asked.

I’d love to hear about your “aha!” moment! Share them with me in the comments.

****UPDATE**** Hillary F here. I just had to add this image which I just screenshotted from facebook, because Lindsey is awesome.  Just call me a proud Mama Bear. 🙂