5 Questions Everybody has About “The Chosen” 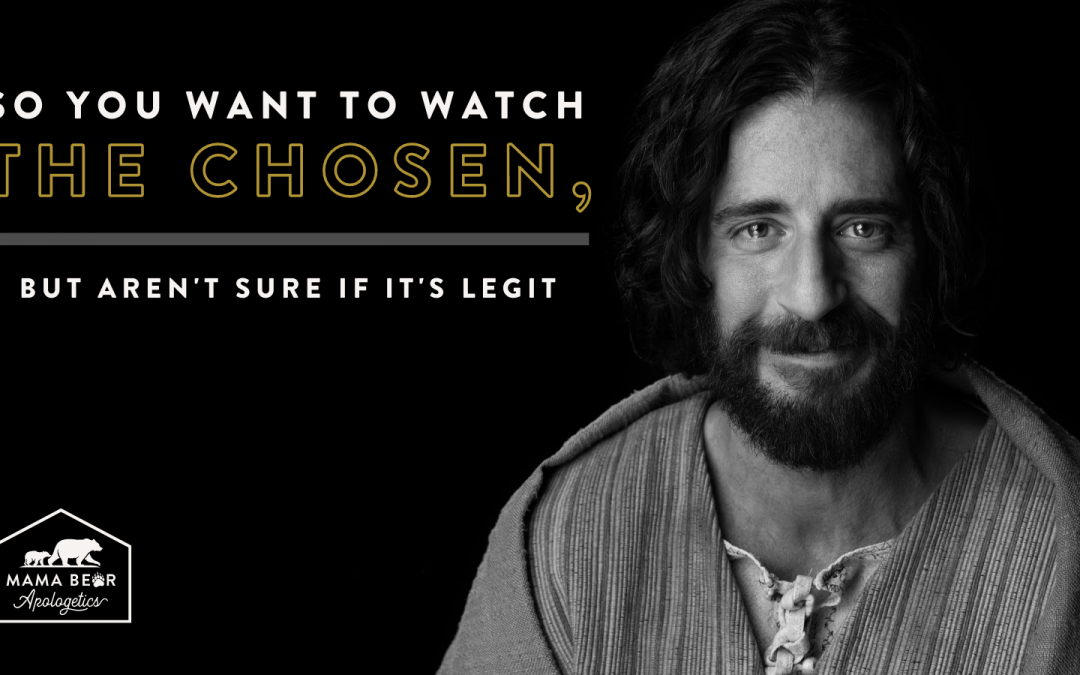 So you want to watch The Chosen, but aren’t sure if it’s legit?

That was the main question that I had when I first saw The Chosen advertised on my Facebook News Feed. (If you haven’t heard of The Chosen, it’s a multi-season series about the life of Jesus. The first season was released in 2019.) I had scrolled by the video clip a few times, thinking, “Do I really need to see another Jesus show? How much chewing and spitting am I going to have to do in this one? I’m too tired to have my radar on the whole time.” And I was proud of myself — the first few times — for being an adult, chopping vegetables for dinner, and resisting the temptation to pause and watch yet another video clip.

Curiosity finally got the better of me, though, as I scrolled by the ad for what seemed like the 50th time (gosh, Facebook is persistent!). The featured clip was one of Jesus and the disciples walking along a road and being approached by a leper. After healing the leper, Jesus asks one of the disciples for a tunic to give to him. What captured my attention was what Jesus said after the healed man put on the tunic: “Green is definitely your color. Not too shabby.” The healed man and Jesus share a laugh and hug. Is that…humor? From Jesus? Normally you could expect a serene smile, the somber glimmer eternal wisdom…but humor?! I’d like to get to know this Jesus.If Jesus was fully human, is it possible He was also funny? The creators of The Chosen seem to think so. Click To Tweet

If you have a basic familiarity with apologetics, you’ve likely heard it said that one of the most beneficial qualities an apologist could possess is winsomeness (which makes women perfect candidates for apologetics, btw. Check out Hillary’s blog on that topic.). It’s not a word that I have the best concept of, given that I rarely (more like never) use it. And yet here it is, embodied in this portrayal of Jesus of Nazareth.

Now, suppose I were visiting you, my Mama Bear friend, and we were sitting on the porch – hopefully in rocking chairs and sipping on sweet tea (or perhaps a pumpkin spice latte, now that autumn is here), while our children play outside. What are the main things about The Chosen I would want to squeeze into the conversation before someone hits someone else with a shovel in the sandbox?

Let’s tackle the most important question first by taking a look at the statement that appears at the beginning of the series:

“The Chosen is based on the true stories of the gospels of Jesus Christ. Some locations and timelines have been combined or condensed. Backstories and some characters or dialogue have been added. However, all biblical and historical content and artistic imagination are designed to support the truth and intention of the Scriptures. Viewers are encouraged to read the gospels. The original names, locations, and phrases have been transliterated into English for anything spoken.”1The Chosen Global Livestream: Episode One

Note how they emphasize that viewers should read the Gospels for themselves!  I was immediately encouraged by that. Another thing I truly appreciated was that the director addressed some concerns viewers had and made a short (11-minute) video titled, “Can you trust The Chosen?,” where he reiterates that The Chosen is a narrative, not a documentary; it is not a replacement for Scripture. Nevertheless, they know they have an obligation to take the show seriously. So, what’s a narrative, and what’s a documentary?

documentary: based on or re-creating an actual event, era, life story, etc., that purports to be factually accurate and contains no fictional elements

Given that The Chosen will consist of multiple seasons, it makes sense that, in order to help viewers relate to the various characters, backstories need to be developed. Take Simon’s (Peter’s) wife. She’s not directly mentioned in the Bible; rather, we learn that Simon has a mother-in-law (Matthew 8:14). In The Chosen, his wife has a name (Eden), a personality, and a realistic relationship with Simon. Throughout the episodes, we even get to know some of the Pharisees, which helped me consider them as actual people rather than a nebulous cluster acting in unison. The producers of The Chosen seem to take the Bible seriously and it shows in each episode. Click To Tweet

A few things did stand out that made me go back to the Gospels for a review. Perhaps the most unexpected event was that, at the end of Jesus’ nighttime meeting with Nicodemus, He invited Nicodemus to follow Him (to travel with Him). While that invitation was not recorded in the Gospels, it was also not denied, so I wouldn’t charge the show with being inaccurate, just taking some liberty with the narrative. Additionally, I noticed that John was already in prison by the time Nicodemus met with Jesus (see John 3), so this is an example of the timeline modifications mentioned in the disclaimer statement. Nothing stood out as a blatant misrepresentation, though; I thoroughly enjoyed The Chosen as a biblical narrative and would not hesitate to recommend it to others.

2) Is it appropriate for children to watch?

My first impulse is to exclaim, “Absolutely!” Yet I would encourage you to watch each episode first, before watching it with your children. After all, you know them best and will be aware of what they are able to pick up on, and it will also allow you to think about any questions you might want to ask them afterward. My main reason for saying this is that there are a few scenes containing mature themes, especially in Episode 1. And of course, the show is set in Roman-occupied Israel. But overall, they do an excellent job of conveying a sense of oppression without portraying violence.

With regard to certain scenes in Episode 1, those you may want to be aware of are: Mary Magdalene’s struggle with demon possession; a flashback in which we see a Roman soldier pushing Mary down (about to assault her, though the assault is not shown); Mary standing at the precipice of a cliff, contemplating suicide; and Mary begging for a drink in a tavern.

Ooh, this is a hard one. I tend to have scenes from various episodes that I like to watch over and over. But if I had to choose, it would be Episode 7, “Invitations,” primarily because Matthew is my favorite character. From the time you first encounter Matthew in the series, you will notice that something’s different about him. Interestingly, he is portrayed as having Asperger’s Syndrome, and he speaks bluntly and honestly. I suppose what draws me most to him is that he is genuine, and he watches Jesus carefully as if he were analyzing Him. By the time Jesus calls Matthew to follow Him, Matthew doesn’t hesitate; he immediately leaves the tax collector booth and walks over to Jesus. If only we could all be like Matthew and drop everything to follow and obey Jesus without excuse!

Other powerful and touching scenes include the healing of the leper (Episode 6) that I mentioned earlier, the night meeting between Jesus and Nicodemus (Episode 7), the healing of Peter’s mother-in-law (Episode 8), and the conversation between Jesus and the Samaritan woman at the well (Episode 8). On second thought, I really can’t narrow the best scenes down to a handful; just watch all of the episodes!It's hard to narrow down my favorite The Chosen episodes. Just watch them all! Click To Tweet

You can watch Season 1 (eight episodes) by downloading The Chosen app (available on both iOS and Android). What I love about the app is that I can not only watch the episodes on my phone, but I can also easily cast them to the TV. All you have to do is touch the “Send to TV” option under the episode and select your device (Roku, Amazon Fire TV, Apple TV, etc.). The app also offers multiple language options for audio and subtitles. The episodes are available on YouTube as well, although you have to fast forward through some introductory commentary (unless you want to watch it, of course!).

And perhaps best of all, the episodes are free to watch (can I get an amen?)! They have an interesting setup, in which viewers can watch it for free thanks to donations made by others, who have paid it forward. You are encouraged to pay it forward as well, but I certainly did not feel pressured to do so. The series is crowdfunded (and has grown to become the largest crowdfunded entertainment project of all time2“Story about life of Jesus emerges as largest crowdfunded entertainment project in history”), and it’s people like you and me, rather than Hollywood producers, who are helping to fund the creation of future seasons.

When I started watching The Chosen, I was grateful that it was free, and I was not planning to make a donation. By the time I had finished watching Season 1, I eagerly wanted to be part of funding the next season. “Now this is worth supporting,” I thought. Have you seen those memes that advertise a product that’s so awesome, that all you can say is, “Take my money!”? Well, that pretty much sums up my response to The Chosen.

Is this series perfect? Of course not; no show is. But I have to say this is the best “Jesus” show I have seen. They have managed to deliver an endearing portrayal of Jesus’ humanity (from being silly and playing with children, to joking with the disciples and dancing at a wedding) without diminishing His divinity. The Chosen does an exceptional job of highlighting the relatability of the characters and showing how they could see Jesus as a beloved friend, not just someone to revere.

Have you watched The Chosen yet? If you haven’t, I hope these thoughts have encouraged you to at least check out the first episode.

(And fun fact, the title of this blog can be sung to the tune of “Do You Want to Build a Snowman?” because #girlmom …)

Robin helps out with tech-related tasks and reads articles for the Audio Apologetics Blog-Cast. She has a master’s degree in Geospatial Intelligence and works part-time as a Geographic Information Systems (GIS) specialist, but her favorite job is being a wife/mom/homemaker. In her free time, she loves studying apologetics, reading classic literature, and birdwatching.