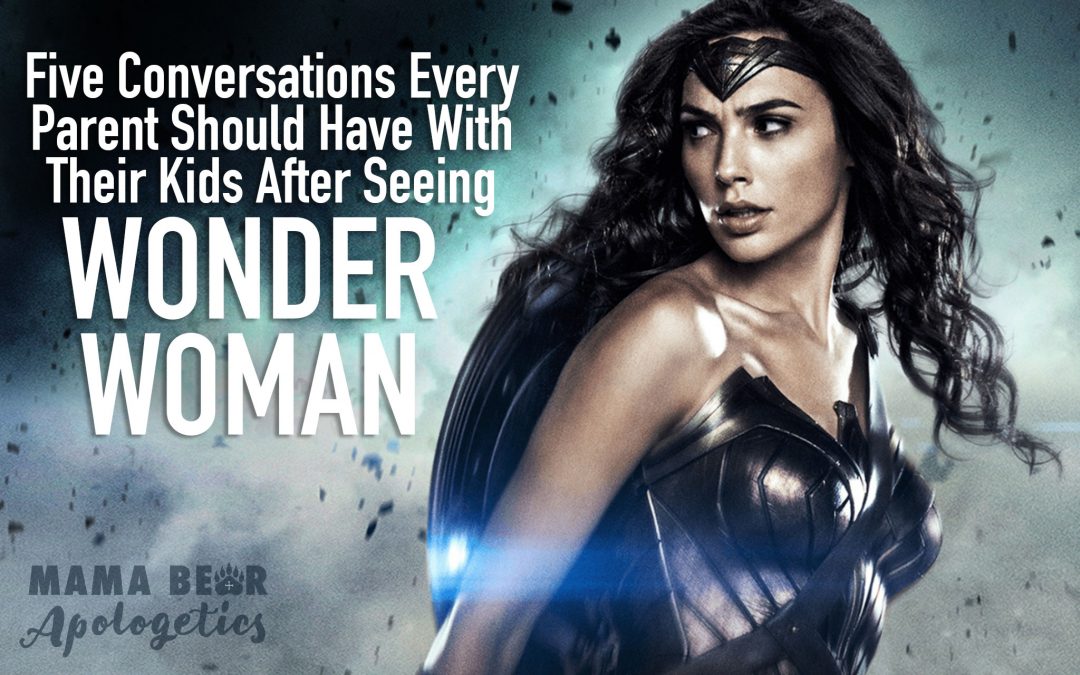 I saw Wonder Woman for the second time this week, and loved it both times. I loved the story. I loved the cinematography. It was well-crafted and well-executed. I loved the pro-woman message. It wasn’t the modern feminist message; it was a classic feminist message. It was empowering to women without being dismissive to men. It reminded us that we don’t have to wait for someone else’s permission to do the good we are capable of doing. And even when Wonder Woman was blazing the trail, she didn’t start with intimidating displays of power. She started by observing, listening, and assessing the situation. She didn’t barge into rooms and start ordering people around. When they got to the battle field, she served by deflecting the fire-power of the enemy, protecting those around her, and making it possible for hundreds of others to advance in her wake. In other words, she was a Mama Bear.

My favorite part of the feminist message (and by “feminist” I am referring to first-wave feminism, not what passes for feminism now) was that in no way did her exercise of power degrade the valuable roles of the men around her. This was not a story of a woman coming in and taking charge. None of the men around her became any less heroic when she entered the scene. On the contrary, each of the men became more so. By fulfilling her calling, she not only benefited those around her with the unique skills that she brought to the table, but she empowered those around her to rise-up and become better versions of themselves as well. The men she associated with were more empowered, more virtuous, more selfless, and more courageous by associating with her, not less. That is a feminine role model I can endorse.

While there were a few spots in the movie that parents should be aware of, Wonder Woman was a wonderful movie that I would recommend. Side note: there’s a brief conversation where the character says that men are necessary for procreation but not pleasure, and a brief scene of almost nudity by Chris Pine. If there is ever any question in your mind about what’s in a movie, go to www.kidsinmind.com. They outline anything and everything a parent might find offensive.

However, like all media, we should employ the chew and spit method. Glean the good that can be gleaned, and reject the parts that are contrary to a Biblical worldview. If you do choose to see this with your kids, here are a few talking points I recommend having afterwards.

1) What is the underlying message?

Now, Wonder Woman followed up that statement with “And I believe in love.” While this sounds like a great message, there’s two major points that every parent needs to address with their kids, which are listed next as points 2 and 3.

2) The object of your belief matters much more than the fact that you “believe.”

When Wonder Woman said, “It only matters that you believe,” I suspect that psychiatrists, psychologists, and counselors in the audience were doing a face-palm. They of all people are very aware that what someone believes matters. They have seen firsthand the dangers of people who place their faith in something false. You can complete Wonder Woman’s statement with anything. “It only matters what you believe, and I believe . . .

. . .that the government has hidden bugs in my lampshades and is listening to my conversations.

. . . that I am really a cat trapped in a human body. (See a person who believes this)

. . . that gender is a social construct.

. . . that love means never having to say you’re sorry.

. . . that I am a tall, African-American basketball player.

. . . that I deserve to be beaten by my boyfriend.

. . . [fill in the blank with LITERALLY anything.]

Friends, there is no innate virtue in “belief.” I’ve had students that truly “believed” that I should round their 45% up to a 70%. The statement “It only matters what you believe” is as nonsensical as “Just have faith.” Have faith in what? That I can fly if I jump off the roof? That people will never fail me?

Like faith, belief is utterly worthless apart from the object of the belief. If you believe something wrong, crazy, or just plain evil, your belief is a negative, not a positive. What you believe in is the most important thing in the world, and we better make sure that the object of our belief is true, reasonable, rational, good, defensible, and based on an unchanging standard. I personally have placed my faith in the love of a Savior who died on a cross and rose again, in time, in history, with lots of witnesses.

This might be a good time to conduct your own family experiment. Ask your kids, “If we were to have a family statement like Wonder Woman’s, what would it be? Complete this statement. “It only matters what you believe in, and we believe in. . .” You can see what they have absorbed thus far. It might be an eye-opener for you.

3) Beware the buzzwords, especially ones that have multiple definitions.

I am very glad that “love” is the ideal that Wonder Woman believes in. In fact, the way she appears to define love very closely mirrors a Biblical love. Her “belief in love” manifested in her “seeking the good of others,” and sacrificing herself for their well-being. This is very similar to the agape love that we find in scripture.

However, the rest of our society is a bit confused about what this little word means. Hence, this would be a perfect time to have a discussion with your children about the equivocation fallacy. The equivocation fallacy is when you use a word in two different ways. I’ll be honest, I rarely see the word “love” portrayed in a way that is consistent with scripture’s depiction of love in 1 Corinthinans 13. The more common definition of “love” in our post-Christian society has little to do with self-sacrifice, and much more to do with who you are sexually attracted to, or what feelings you have towards a person or object. “Love” also means not just tolerating someone’s beliefs and actions – beliefs and actions that may contradict scripture – but celebrating these beliefs and actions and calling them “good.” (Isaiah 5:20)

If “love” means rejecting Biblical truths in favor of something more comforting, you no longer have love. You have comfort. In fact, comfort is probably the best definition of what love has become in our society. If you do or say anything that makes someone uncomfortable, that is unloving. In some cases, it’s even considered hate-speech.

So, here’s another opportunity with your kids. Ask them what love is? Ask them about what the Bible says about love? Ask them what Wonder Woman did that was loving? What parts mirror the Biblical definition? Thankfully, a lot of her actions do mirror Biblical love. However, in having these conversations, you will have made memories with your children regarding this topic so that when alternate definitions of “love” crop up later in popular culture, your kids will have a foundation of what we as Christians mean by the word “love.”

There are a lot of harmful feminist messages circulating the blogospheres, and it is imperative that our little girls know that they can be empowered, capable, agents of change in this world without having to trample men in their wake. I have actually heard a lot of modern feminists critiquing the new Wonder Woman movie, and I have to wonder if it is because she doesn’t embody the “A woman needs a man like a fish needs a bicycle” stereotype.

There are a lot of directions the story could have taken. Once the men saw what Wonder Woman was capable of on the battlefield, they could have all turned to her and said “You lead us! What should we do now?” However, that didn’t happen. Instead, each of these men around her began to embrace a more honorable version of masculinity, taking leadership in ways that they would have shunned before, and working together as a team instead of as individuals all vying for their own interests.

Ask your kids, “What were the men like before they met Wonder Woman? What were they like after?” Be looking for ways you can address the beautiful transformations that we saw in the ancillary characters. The man who originally said, “Nobody pays for honor,” was the same man who was later willing to sacrifice himself on the battlefield, and he did it knowing that there was no money involved. The truest and most empowered form of femininity encourages a true and empowered form of masculinity. It is not a zero-sum game.

5) Distinguish between myth and reality, especially when it comes to foundational worldview beliefs

I was going to leave this one unsaid, but it should probably be mentioned. Wonder Woman is set in an obviously make-believe world, from the perspective of multiple, dueling gods. It is always good to distinguish that from the Christian worldview of our Triune God – one God in three persons living in eternal relationship, unity and love. I don’t expect mythical stories to sound like a Christian worldview, because the Christian worldview is based in actual, historical events, and not mythology.

Most kids can distinguish between make-believe and reality. However, it’s usually better to be safe than sorry. This would be a great opportunity to talk about the difference between myth and history. How are the myths from Wonder Woman different from the historical account of Jesus? (Hint: history references people, places, and times that can be investigated. Myths are usually vague, occurring “long, long ago in a far-off land.” Historical events often claim to have eye witnesses, and offer ways to investigate the claims. Myths usually leave no clues by which you can verify actual people, places, or times.) The sooner you can show your children that the historic claims of Christianity are different from the genres of mythology and legend, the better.

Finally, I don’t want to give away any spoilers, but I can’t leave this final thought unsaid: Beware a Mama Bear when you mess with the ones she loves. As Chesterton said, “The true soldier fights not because he hates what is in front of him, but because he loves what is behind him.”

Did you have any interesting conversations after seeing Wonder Woman? Tell us about it in the comments! Or let us know some of the fun answers your kids gave to the questions above. 🙂

Our posse of fierce WONDER BEARS! 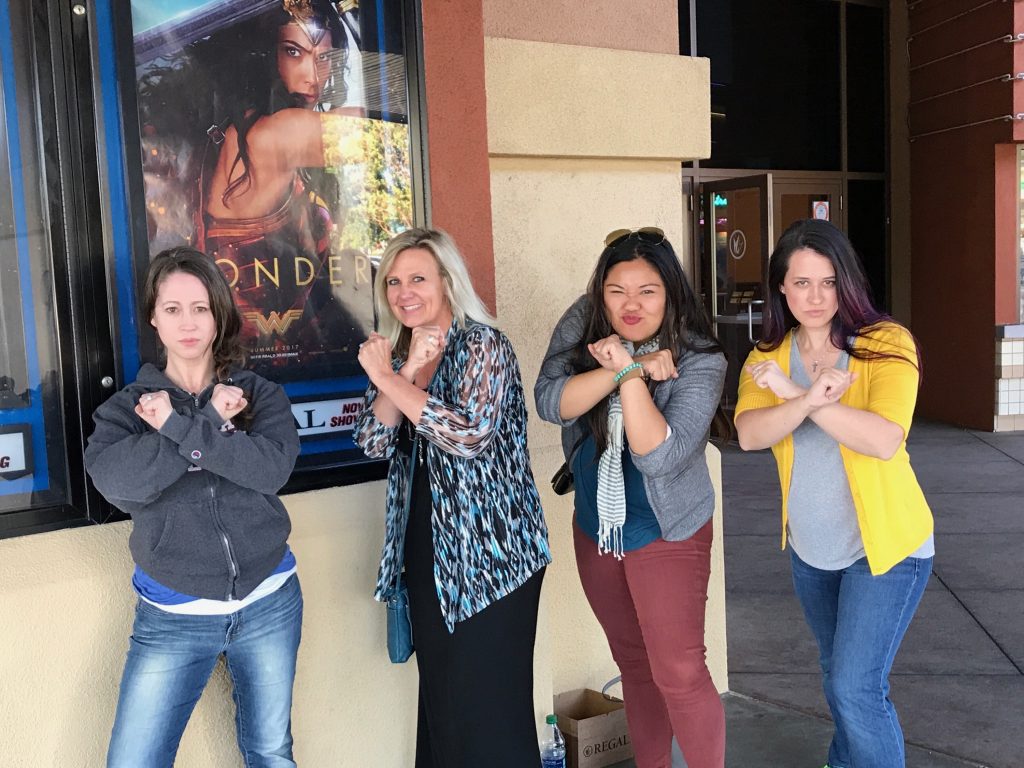 Wonder Women of the Faith! Hillary, Laurie, Jane, and Rachel 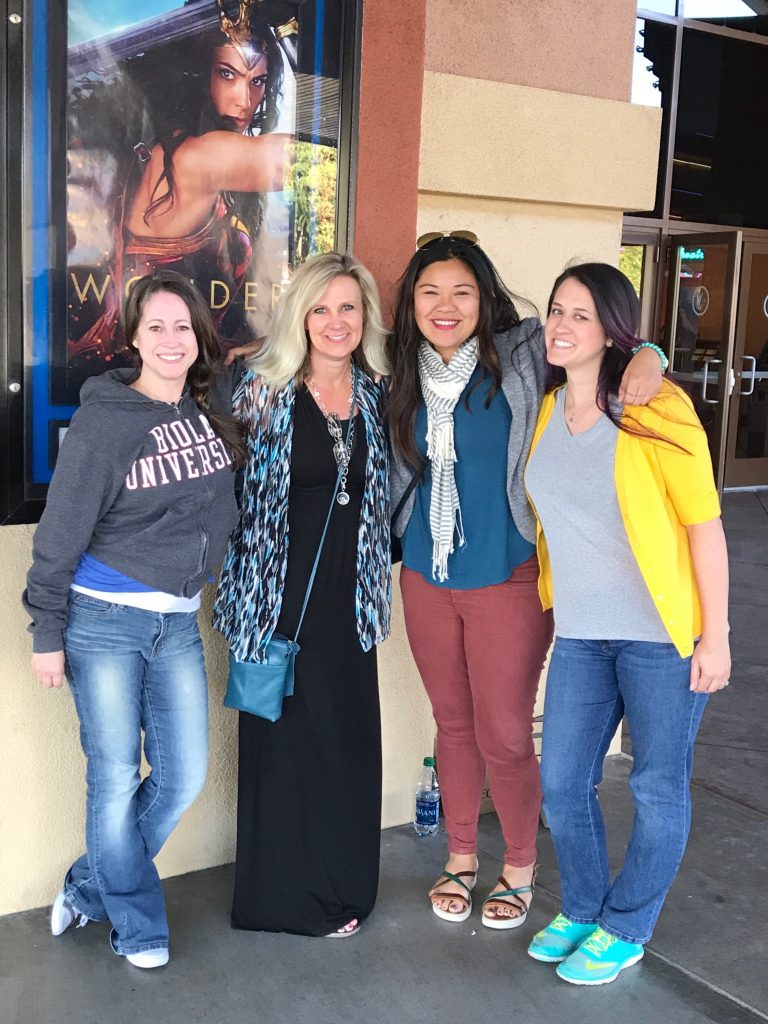