5 Biblical Men Every Boy Should Know 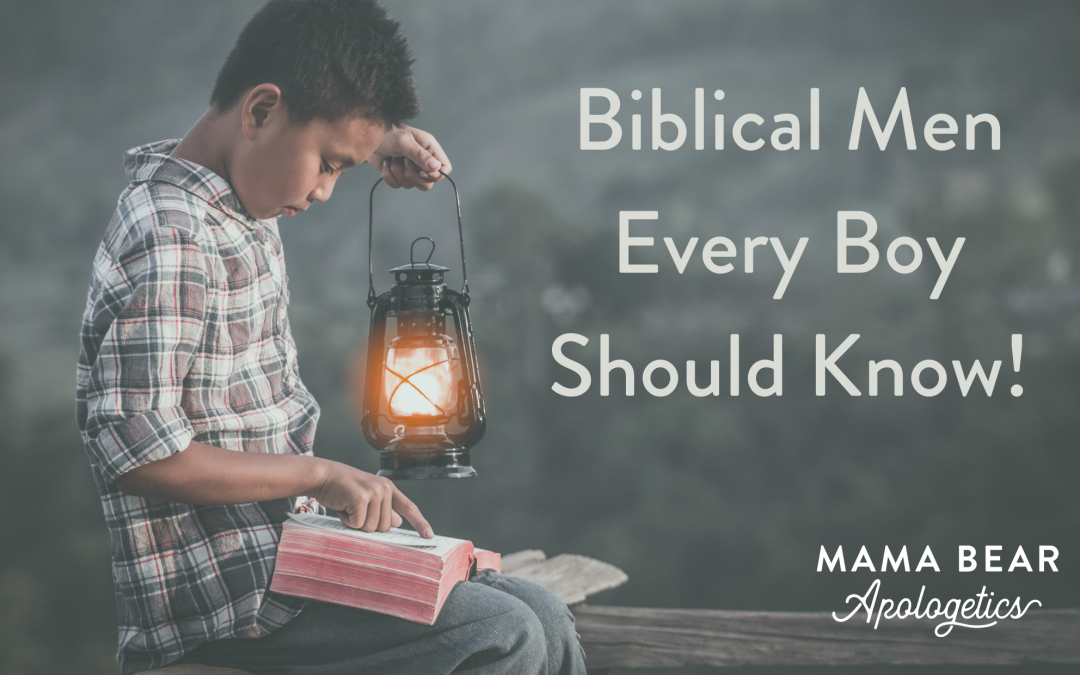 A Twitter post caught my eye a while back from a brother in Christ who was fed up with his church’s take on biblical manhood. Manhood, it was implied, was a burly trinity of plaid, football, and Clint Eastwood. As if the lost 11th commandment was: Thine beard shall be like Jesus, and thou shalt give John the Baptist a run for his money with thine outdoorsman skills!

I know a lot of guys who would have no problem with this definition of manhood. But our guy on Twitter felt out of place, at church and even with his own manly identity.

Mamas, our boys have been fed a line or two about what it means to be a man. Just like our girls (read about women your girls should know here), boys have been handed a superficial view as a way to stand firm against the feminization and vilification of men. Both of which are a huge problem.

But we can’t help them understand true manhood if our go-to move is dressing our little guys up like they’re the Brawny paper towels mascot.

Manhood is more than knowing what a 2-point conversion is. (That’s an evangelistic strategy, right?) And it certainly isn’t lost if they’d rather contribute to the bake sale than go on yet another camping retreat.

True biblical manhood is the act of submitting oneself to God while loving those around us like Christ. No beards required. To get your boy on the right path, let’s look at a few men in the Bible who model what it means to be a man.

Our first bearer of biblical manhood would probably have been the most popular. Wealthy, good-looking, and royally well-connected. Honestly, the only thing that Daniel lacked was a town free of political turmoil. When Jerusalem was raided by the Babylonian army, he and his three buddies were handpicked to compete in Nebuchadnezzar’s version of Next Top Servant.

For three years, Israel’s best and brightest went through the most elaborate indoctrination camp the world had ever seen.1The best food, clothes, and teachers that royal money could buy! They even got new names to round out their new Babylonian identity change. In the end, none of the forced converts of Israel were more impressive than Daniel and his pals. And they did it all without compromising their faith in God.

If you have a little Daniel running around your house, he’s probably friends with everyone in his class. He also has no problem standing his ground when other kiddos want to get into mischief. While the early years will come easy, he’s headed for a world that looks more like ancient Babylon with every passing moment. And boy does it look tempting!

To help him stand firm like Daniel, equip him by studying theology, apologetics, and philosophy. Each will help him to better know God and recognize the weakness of worldly arguments. If he’s anything like our man Daniel, he’ll learn to resist compromising his faith with firmness and grace (Daniel 1:8-21).

If Daniel was Mr. Popularity, then Joseph was the pesky little brother of the group. This daddy’s boy had a tendency to rat out his older brothers and talk about how he was going to be the greatest in the family. A personality trait that earned him a one-way ticket to servanthood in Potiphar’s household.

No, he wasn’t perfect, but what’s impressive about Joseph was his faithfulness to God during the ultimate sensual temptation.

You see, Potiphar’s wife wanted this handsome hunk of man-meat to sleep with her. Joseph could have easily given in, but he wasn’t like most guys. He had a fruit of the spirit that’s integral to biblical manhood: self-control.

If you have a little Joseph in the mix, he might be quick to tattle, especially when his brothers are playing with Legos rather than cleaning their room. But this adorable little nark holds himself to those same strict standards.

A time is coming, however, when those standards will be put to the test. And one skill every boy needs to be a true man is self-control.

Encourage your little Joseph by helping him recognize the beauty and design of things that require self-control (Genesis 39:9). Ask what would happen if people did what brought them pleasure all the time? Then discuss accountability skills you both can implement in your lives to help practice self-control. It isn’t always easy, but the outcome is worth the effort.

If ever there was a guy that seemed to lack the proverbial man card, it was probably Jacob. He was the antithesis of his womb-mate, Esau. Esau hunted, he looked like Chewbacca, and I’m willing to bet his first word was “steak.” Esau was the stereotypical ‘boy,’ and his dad, Isaac, loved him for it.

Jacob, however, wasn’t having any of that. Soft-spoken by nature, he liked cooking with mom rather than field-dressing a deer.2But what Jacob lacked in brawn he more than made up for in brains. He was a natural businessman. His diligence not only earned him great wealth but the love of his life. And his relentless persistence led to a blessing from the Lord. And you know what? He was no less a man for it.

Most people (including the church at times) only look at the exterior when it comes to manhood, but God looks at the heart (1 Samuel 16:7). Jacob showed that manhood can be just as gentle and quiet as it is hunting and beards. But we can miss that when we’ve bought into the lie that boys have to be pint-sized Vikings to be worthy of their gender.

If you have a little Jacob in your house, he’s a sweetie. He likes to help mom and can go the entire day without making a mess of himself. But watch out, those adorable smiles might be used to hide some sneaky behavior.

What your boy needs to know is that manhood isn’t measured by how often he shops at Bass Pro Shop. It’s having a heart for the Lord. Part of this is demonstrated in the gentle nurturing of his family. Praise his loving heart while still including him in a range of activities. Remember: even though Jacob was quiet, he wrestled like an Olympian when the situation called for it (Genesis 32:22-32). So don’t underestimate the fierce spirit behind that soft-spoken nature.

We don’t have many backstory details of our New Testament Bob Villa, but what we do have is a beautiful example of our next biblical manhood trait: protecting.

Joseph the carpenter was your average tradesman. He was getting ready to start his family when he got some startling news: his betrothed, Mary, was expecting.

Joseph could have had Mary publicly disgraced, but because he was righteous, he protected her by seeking a private divorce.3Some might argue that if he really wanted to protect Mary, he wouldn’t have tried to divorce her at all. Fair point, but this doesn’t take culture into account. Today, being an unwed teen mom gets you a reality show on Lifetime. Back then they were an outcast of society that could have been killed. When Joseph sought a private divorce, he was protecting her from gossip and public disgrace as much as he could. Which kept this a matter within Mary’s family and not the whole town. Then God sent Gabriel with some impressive news: Joseph would be the adoptive earthly father to the King of Kings. All at once, everything changed. Joseph stepped up and provided for Jesus as if He were his own. He then left everything behind to flee to Egypt to keep them safe from Herod’s attack.

If you have a Joseph in your house, he doesn’t mind when little ones come over. He’ll get right down and play and even share a snack. Help reinforce the beauty of babies and the importance of the family by nurturing this God-given protective nature (Philippians 2:4, Genesis 2:24, Psalms 82:4).

Society suffers when it hinders a man’s inborn desire to protect. As he gets older, help him protect the most vulnerable by recognizing the faulty logic of modern feminist and pro-choice arguments.4Especially the challenge that his views don’t matter because he doesn’t have a uterus. *Hint: If his views don’t matter because he lacks a uterus, then what about the views of the men who passed Roe v. Wade? Shouldn’t theirs’ not matter, too? This will not only help him understand God’s design for children and family, but it emboldens him to reclaim his voice in a culture that desperately wants him to be silent.

I’m willing to bet that you had no idea there was a ‘Jason’ in the Bible, but this guy’s story is too exciting to go unnoticed. It also illustrates our last point that goes hand-in-hand with protecting: men defend.

In Act 17, we find Paul and Silas were staying with our man Jason during a preaching pit-stop in Thessalonica. They had spent three days reasoning in the local synagogue that Christ was the Messiah, and the Jews were less than thrilled about their sermon series. So, they gathered up the roughest guys they could find and sent them to capture to apostles.

When they couldn’t find Paul and Silas, these wackadoos dragged Jason into court. But Jason wasn’t going to give up the apostles no matter how much he was threatened. Once Jason was released, he snuck over to where they were hiding and helped smuggle Paul and Silas off to Berea and out of harm’s way.

If you have a Jason in your house, he will defend his pals to the bitter end. Sometimes this can be less righteously motivated and more ‘snitches get stitches’ in nature. Especially when they reach middle school. Trust me on that one.

Being a defender is an important aspect of biblical manhood, but it’s also a skill that needs training for it to be channeled properly. To help them learn the difference between defending the needy and aiding and abetting, read Acts 17:1-10 and discuss what it means to defend one another.

To round out the lesson, hop over to 2 Samuel 12 and read about how Nathan confronts David in his wrongdoing. This two-person combo will help show your boy that accountability is a vital part of being a good defender.

Being a boy mom is an amazing blessing and a cherished responsibility. I pray that these biblical men will inspire your boys to be fearless for God.