10 Things to Pray Every Day During September 2020 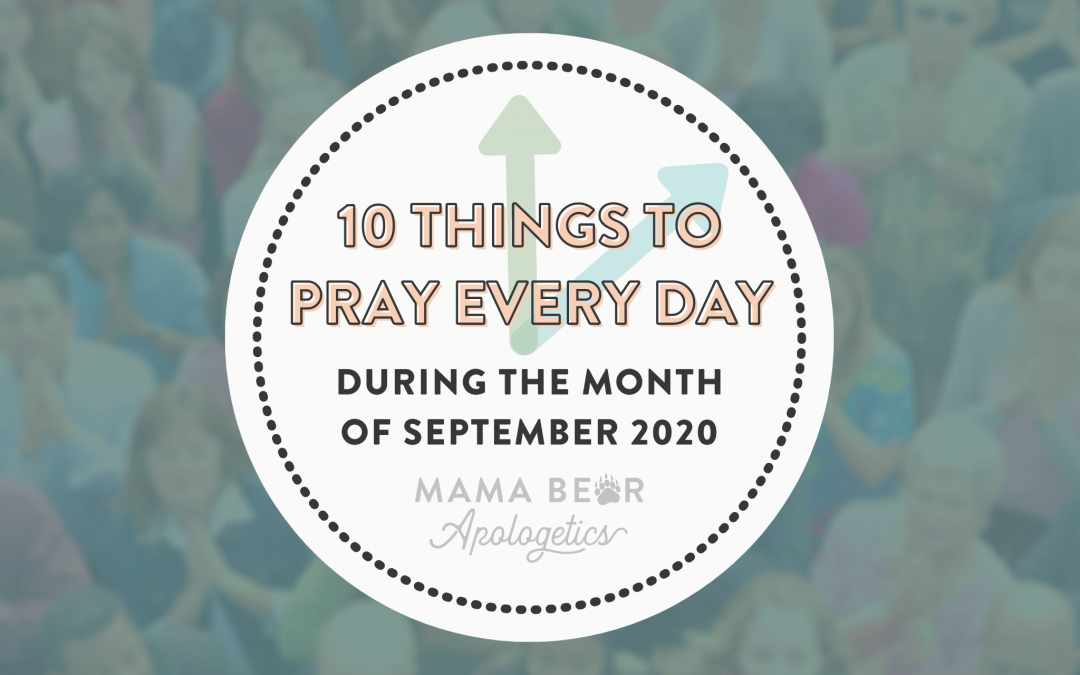 Mama Bears, there has been something stirring in my heart for a few months, and I haven’t been sure what to do with it. It is no secret that we at Mama Bear have always placed a high value on prayer. But I believe that in the coming months, it will be even more important than we could possibly imagine. I confess that I don’t always understand the power of prayer, but I don’t have to understand something to heed the call that God is giving. So, with whatever influence I have, I want to be faithful to the Lord has impressed upon me.

These 10 things revolve around expanding spheres of influence, starting with ourselves, then to our families, then our churches, then communities, then government, and finally, the world.

My encouragement to you is to involve your family and your community in this endeavor because we need the unity of believers. If your children are at home, pray with them. If you are at work and have other believers, pray with them. If you have no idea if other believers are around you, pray by yourself. And while the New Testament admonishes us to avoid the praise of men by praying on the streetcorners, I think we can safely say that time has passed. There were times when the followers of God were rewarded for praying openly, publicly, and in community, namely when hostility toward God was high. Friends, look around. Christianity is not exactly sitting at the cool-kids lunch table anymore if you know what I mean. So, because I don’t think there’s a risk that we’ll receive  “too much praise,” I am asking for us to pray publicly. Not loudly or obnoxiously, just publicly. We can no longer aim for “not rocking the boat.” The boat is rocking already. It’s time we cry out to Jesus to calm the storm.

Set an alarm on your phones, and wherever you are — stop and pray. On the subway, on a walk around your neighborhood, in a restaurant, or at your work cafeteria. Feel free to pray for more than these 10 things, but for the sake of a communal cry to God, please pray at least for these 10 things.

Pray that the Lord would convict us of our own sin and bring us to a renewed repentance and trust in the Lord’s grace. Pray that the enemy would not confuse our desire for holiness with the lie of legalism. That’s usually his tactic. May we pray conviction over our own sin before we start praying over the sins of others. #prayer Click To Tweet

The enemy would love to take this outpouring of prayer and hijack it — imitating God and then speaking lies. Pray for protection and discernment for believers, that we might test all things according to scripture and not be fooled by any counterfeit spirits — even if they come from among our ranks. A lot of wacky voices are being touted as biblical wisdom. Lord, give us discernment. Click To Tweet

3. Unity around the essentials

Pray that we would unify around the essentials of the faith, and not confuse them with the negotiables. Denominational splits often involve doctrinal differences, not salvific principles. Times of persecution are not the time to split hairs. We all need each other. However…

4. Division from sin and godless ideologies

Unity around truth means nothing unless we also divide from falsehood. Pray for the courage to divide over non-negotiables and that we would know what these are. We are called to “as far as it depends on us, live at peace with all [people].” (Romans 12:18) But friends, we were never called to unify with all people. We have interpreted acceptance by the world as proof that we have loved them well. But Church, being loved by the world has never been promised. Christ said that the world would hate us because they hated Him first (John 15:8). We can no longer fear being hated for our Christian worldview. Yes, live at peace with all men, but not at the expense of compromising being a holy people unto the Lord, set apart. And yes, this will be a tough pill for our kids to swallow. Let’s walk them through this.Prayers 3 and 4: Lord, may you unify us in your word — being of one mind regarding the major issues, give grace regarding secondary matters. the non-essentials, and the courage to divide over that which compromises the gospel. But… Click To Tweet

In my prayers for our nation, I’ve had a visual of this dark cloud of fear hovering over our cities. Pray that God’s light and His love would pierce this fear for everyone — Christian and non-Christian alike.

6. Corruption to be exposed

7. Pray for the church to be prepared to stand firm

I can’t give a lot of specifics on this, but the passage that keeps coming to mind is when Jesus (in the garden of Gethsemane) asks the disciples to pray that they would not fall into temptation. We may think that we are stronger than we are. But like Peter, we may be surprised at how we behave when it becomes unpopular to stand with Jesus. Pray for yourself, your kids, your family, and your church to stand firm no matter what comes. Lord, we don't know what's coming, but something is coming. Like the disciples in the garden, please give us the courage, faithfulness, and strength to stand firm, no matter what. Click To Tweet

Marriage and family are the first institutions created and blessed by God. The enemy would like nothing more than to see them destroyed. Pray for the marriages in your family, your community, and the world.

9. For ideological lies to fall and for God to draw men and women to Himself.

There are a lot of ideas “raised against the knowledge of God” parading around like wisdom and truth. Pray specifically for these lies to be exposed. (2 Corinthians 10:5) There are a lot of people in our world who have fallen prey to these lies. Pray that the Lord would remove the scales from their eyes, clear the fog from their heads, and for His light of truth and love to sweep away the cobwebs of confusion — for Christian and non-Christian alike.  Pray that God would be drawing the hearts and minds of people to Himself. Pray that the scales would fall from the eyes of those who are captive to ideological enemies. #prayer Click To Tweet

***And because y’all asked, here’s a handy-dandy print-out to use to keep with you!*** 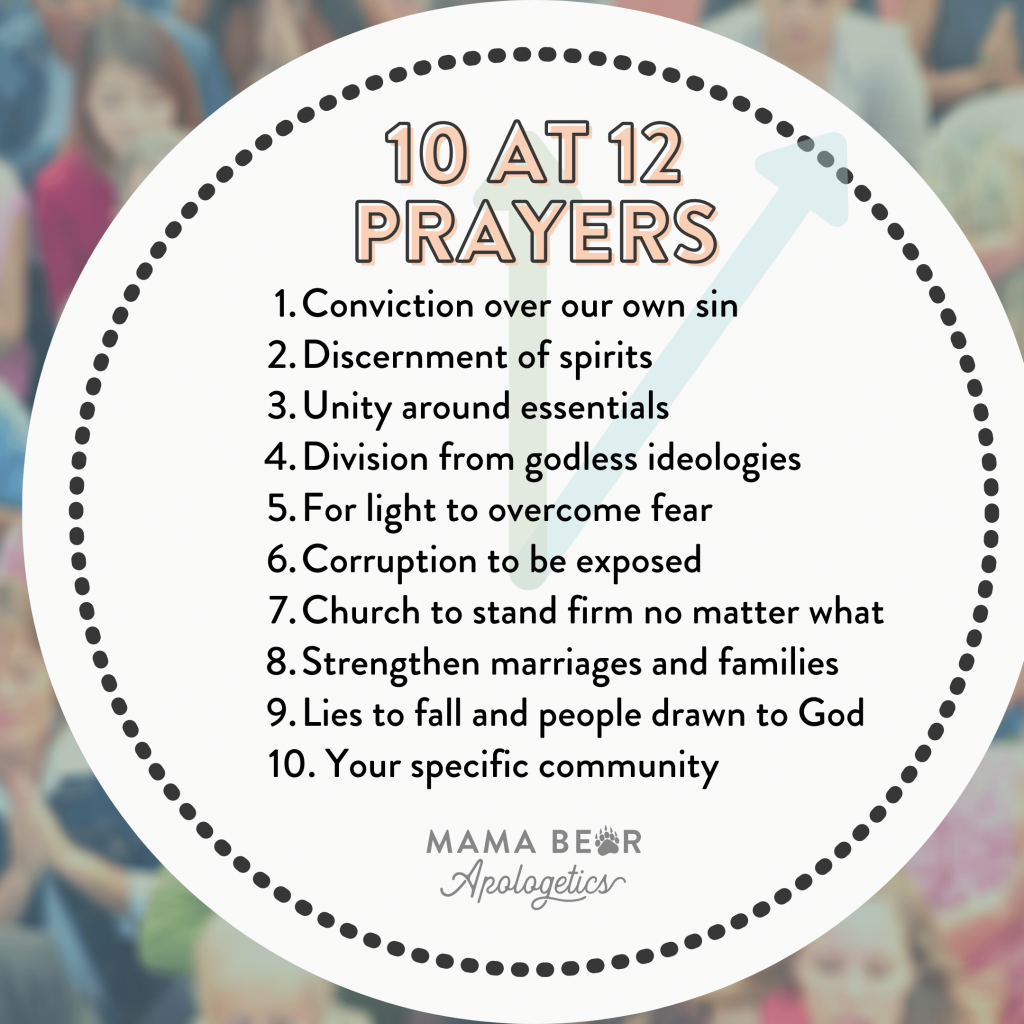